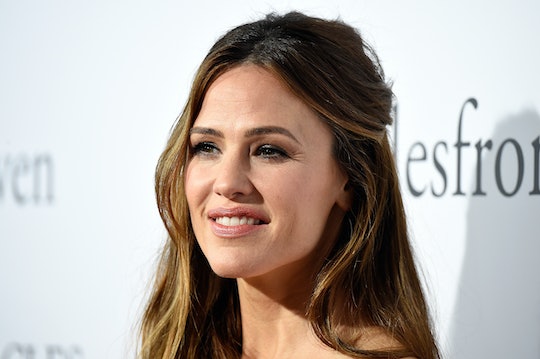 Once Again, Jennifer Garner Has Nailed How Moms Feel About Back-To-School Season

She has made me laugh on social media with her silly cooking moves and attempts to declutter her house, so it's not surprising that this incredibly relatable star has continued her talent for narrating mom life as it really is. And once again, Jennifer Garner summed up every mom’s feelings ever about back-to-school season.

The actress is already famous for her funny clips on social media about her family, which never feel forced or not genuine. But now, Garner has repeated her past success of summing up how moms feel about the start of school, and the return for our kids to academics five days a week.

What am I talking about, exactly? In 2018, the star of TV's Camping and the film Peppermint, had the internet chuckling with her nailed-it Instagram interpretation of moms during the long summer school break, featuring a photo of Garner smiling and looking peppy while holding a list of "fun summer ideas," alongside the caption, "Moms: first day of Summer." The next photo, however, shows a "bloody" and "beat-up" Garner, with the caption reading, "Moms: Last day of Summer."

I remember feeling like Garner must have been snooping at my house, but clearly it wasn't just me because over 243,000 others "liked" the post.

Well, she has done it again, folks. Her new post, in honor of the official return of fall, bears two sentences. The first says, "Moms: I can't wait for my kids to go back to school." The second says, "Moms on the first day of school:" which, hysterically, accompanies a SpongeBob SquarePants clip in which the cartoon character is sadly watching his coffee cool off.

Topping it all off, Garner posted the following: "It was time, Lord, yes. But why does the house feel so empty?....#itstooquiettogetanythingdone #butthankyouteachersandgoodluck."

Yup, I don't know how she does it, but Garner really does manage to distill a lot of "big" parent feelings into a small amount of social media space.

I mean, you should see my house. It's clean, the dishwasher is running, there are no children chasing after each other, screaming bloody murder about who stole the purple sweatpants from the wash. I should be SO happy they are all accounted for in an educational environment that is NOT here (an I am), but man, this place is weird without anyone but me and the dog. The silence is actually kind of creepy.

Luckily, other moms were there for Garner... and for me. "I felt exactly that way today!!!!" one fan replied, while another chimed in, "My heart hurts today." A third was able to offer up the big picture: "Just wait till they go to college and your house will feel really empty. Treasure these precious times."

It's funny, but Garner is the type of star who seems to unite people. Many parents like her, and she never posts anything that will divide or split people up into argumentative groups.

Also, it's probably easier for everyday moms like me to understand a Hollywood celebrity who seems to have a pretty down-to-earth life. On Tuesday, for instance, the actor was spotted picking up two of her three kids, Seraphina, 10, and Samuel, 7, from school in Los Angeles, all the while attired in a simple white tee and jeans.

I'm assuming Garner's third kid with ex-husband Ben Affleck, 13-year-old Violet, is a middle schooler. Thus, Garner likely has her at a separate campus somewhere, providing fans with another reason why she's just like other moms. Juggling kids in multiple schools is no joke, right?

Celebrity or not, however, all parents have to adjust now that back-to-school season is in full swing. The house IS a little too quiet, true. But the possibilities for getting work done or even hitting the gym without needing to check the kids into the daycare make up for it a bit. Happy Fall!