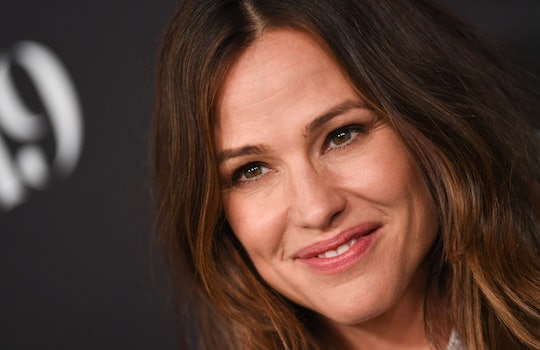 Jennifer Garner is the queen of social media, as she never misses a beat when it comes to relatable parenting posts. From Garner's post about accidentally embarrassing her son at his 7th birthday party to her incredibly accurate musings about the first day of school, fans are always here for her hilarious content. So when I saw Jennifer Garner wore a bathrobe to her daughter's bus stop, I had a feeling parents everywhere would appreciate her latest example of realness. And oh boy, was I right.

Garner might be best known for her hit TV and movie roles, but to her three kids (Violet, 13, Seraphina, 10, Samuel, 7) she's just mom. A mom who makes sure her children are loved and supported, and a mom who ensures everyone makes it to school on time, even if it means showing up to the bus stop in a bathrobe and with wet hair to boot. This was evident on Wednesday, when Garner shared a snap of herself posing in a bathrobe complete with a cup of coffee and wet hair. And did I mention she also rocked slippers?

"She barely made the bus on time, but at least her mother kept it classy," a smiling Garner captioned the shot, which has received over 456,000 likes since Wednesday.

Following Garner's candid post, many parents took to the comments section to say they can relate.

"Every mama everywhere thanks you- and can relate to this!!" another person commented.

A commenter said: "Every day, momma, every day!!

And one especially insightful parent penned: "Been there! You got her on the bus though! Motherhood is one long steady stream of humiliation!"

Of course, it's no secret moms have long admired Garner and feel a connection to her parenting style. The actor discussed this kinship before in a very humble way, sharing with POPSUGAR: “While I find it very kind, and I love that women who have kids relate to me, I find that I am by far the messiest, sloppiest, craziest!"

She continued, "All the moms I ever see always look very put together and I just don’t get it. I don’t see how they do it! But then again, I would look that way if I didn’t have kids, too, probably.”

I can't say for certain, but I have a feeling many moms out there to think they're the "sloppiest and messiest" parents. And it's normal to feel this way, I think — it's cliché, but we're often our worst critics.

The good news? Every day is a chance to start over again, a sentiment Garner lives by. “The absolute [greatest] thing about being a parent is that every day is a fresh start," she told People. You always can say, ‘Today we’re going to try this!’ And if it goes horribly, you can say, ‘Today we’re throwing that out, and we’re trying this!’ That’s part of what I like about being a mom in general.”

So the next time you head off to your kid's bus stop rocking a bathrobe and wet hair, take solace in the fact that Jennifer Garner is doing the same dang thing.