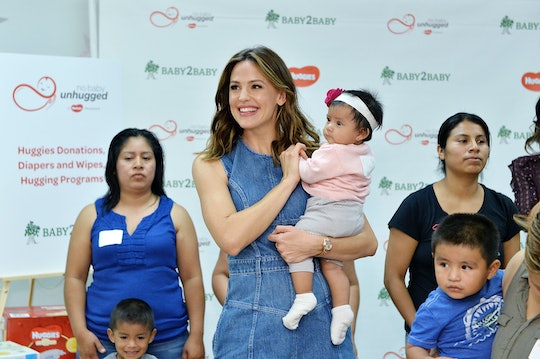 These days, it’s not rare for actors and actresses to donate their time, money, and other celebrity resources to a charitable cause. What is rare, however, is for an actor or actress to become so involved with their charitable work that it overshadows the credits and accolades they’ve received through their craft. Jennifer Garner is one of those Hollywood rarities. Though the 44-year-old actress has made a name for herself by starring in blockbusters like Catch Me If You Can, Dallas Buyers Club, and Miracles From Heaven, to name a few, it's Jennifer Garner’s charity work — particularly her work in helping mothers and children — that will ensure her name lives on long after the last credit roles.

OK, that may be a lot of pressure to put on Garner’s philanthropic work. (And I mean, let’s be honest, who will ever forget her portrayal of the hilariously naive Jenna Rink in 13 Going On 13?) But Garner has proven to be much, much more than just one of Hollywood’s most talented. This month, for example, she is working with Huggies and Baby2Baby to raise awareness about the diaper needs in the United States, with a focus on helping moms who are in need of diapers.

“According to statistics, one in three moms has to choose between feeding her baby and diapering her baby,” Garner tells me during a phone interview, a fact that would break anyone’s heart. But despite this very obvious need, there are very few programs out there dedicated to providing diapers. And, unfortunately, Think Progress noted that programs like Women, Infants, and Children, or WIC, and food stamps don’t cover diapers. This only adds to the stress new moms, particularly those with financial struggles, face on a daily basis.

To help take that stress away from mothers, Garner has been promoting Baby2Baby, an organization that provides diapers to low-income families. The organization recently partnered with Huggies, which has donated roughly 2.5 million diapers and 5 millions baby wipes to the cause through its National Diaper Bank Network. Garner truly believes this program will make a huge dent in providing diapers to families around the country, especially having seen first hand the stress diaper needs put on a family. She tells me,

I go to these homes... and the thing that hits me the hardest is that I see these babies and they have dirty diapers. And I think, ‘Wow, this mom must be so stressed. Diapers must be on such short supply around here that the mom would not give the baby a fresh diaper.’

Though Garner has seen the stress diaper needs puts on families, she's also seen the relief these families feel when they receive diapers to help alleviate the burden placed on struggling families. When floods hit West Virginia — Garner's home state — in July of 2016, Baby2Baby was quick to help families with infants affected. "I called Baby2Baby and said, 'Is there any way that some of those Huggies diapers could be diverted?'" Garner says. "In a state where you couldn't find a diaper, suddenly we had 500,000."

But Garner's charity work doesn't stop with diapers. The actress has been working with Save The Children for years and is currently a member on the Board of Trustees. Though her work with Save The Children, Garner has become a huge activist for early education and helping parents "talk to, sing to, play with, and read to their babies." She says, "We need to be strengthening our school communities," and this requires Garner and other activists to fight for bill support, like universal pre-K, and to work to keep various educational programs funded.

It's clear that Garner has no intention of slowing down when it comes to her commitment to philanthropy. And though it's not odd for celebrities to help with a charitable cause, she clearly takes it to another level. But where does that desire to help others come from? "I live in a pretty philanthropic town, honestly," she says. "I'm surrounded by people that I admire who are doing amazing things in the world, and just that alone inspires anyone to try to do better, be better, do more."

And the desire to do better and do more doesn't go unnoticed. In July 2016, Garner was honored at the Starkey Hearing Foundation Gala for her work with Save The Children. Though it's great that others are taking notice of her work, Garner really hopes her kids see, understand, and value the good she does.

"I just want my daughters to learn that you can be strong and kind at the same time," Garner says. "And I want my son to know the same." And since Garner doesn't plan to stop her charity work any time soon, it's only a matter of time before her children learn that lesson.