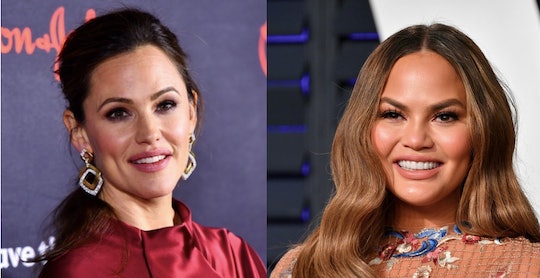 There’s nothing quite like finding good help on the home front. Whether it be a housekeeper or a cook, someone who can help you manage the day-to-day aspects of life that can become overwhelming is a godsend. And Jennifer Garner’s comment on Chrissy Teigen’s Instagram photo of her son Miles will make every mom chuckle as it reveals just who the actress truly values: her beloved nanny.

Over the weekend, Garner realized that her nanny was apparently liking Teigen’s posts pretty frequently, according to the Daily Mail, which led her to post a sweet but stern warning: “I see my kids’ nanny liking everything you put up with your gorgeous kids. And I’m here to tell you, don’t get any ideas, either one of you.”

The latest photo in Teigen’s Instagram — and the one Garner posted on — shows son Miles looking adorably mussed up while sitting in a plastic box. “I know you all think he looks like john but that is my nose, can we at least acknowledge that,” Teigen queried on the adorable photo.

Teigen responded to Garner’s comment with a reminder. “For anyyyyyyone reading this I ONLY POST THE CUTE STUFF,” she wrote on Instagram, according to Us Weekly. That is a reminder that every mom can use, since it’s so easy to compare what you see on social media to your own sometimes-chaotic life.

Teigen posts about her children regularly and recently featured her daughter Luna getting acquainted with her first big-girl bed.

“BIG DAY OVER HERE,” Teigen wrote on the charming video of Luna. The little girl only looked at her new bed for a moment before turning to look around the room. Spying her stuffed animals in the corner she asked, “Why you take this out?” and loaded up her arms to put the toys back where she wanted them. Teigen’s mom also made an appearance in the video.

Teigen herself noted the frequent appearances of her kids on her social media, in a comment on a video of Miles singing into a toy microphone. “john been on solo daddy duty while I visited Pittsburgh for a day of work! I know my feed is ALL my kids now and I don’t know who I’ve become but I can’t stop myself. I need help,” she wrote. Nobody’s complaining about seeing more of your happy children, Chrissy!

Garner recently laughed off a rumor that she was expecting more children of her own, according to People. Reese Witherspoon posted a photo to Instagram of a tabloid cover that claimed both she and Garner were pregnant. “Hey @jennifer.garner! Can we raise our imaginary babies together?” she asked.

“We are going to be the cutest imaginary family!! I’ll just go ahead and move in now…” Garner wrote back.

Unlike Teigen, Garner has kept children’s lives off of her social media platforms for her own personal reasons. "I would never share my kids,” she previously told E! News. “That’s a pretty big roadblock right there…I’ve fought too hard for their privacy personally that it feels weird.”

So we’ll have to wait to see Garner’s young ones until they're old enough to decide for themselves if they want to be on social media. But in the meantime — as long as you’re not Garner’s nanny, hehe — just hop on over to Teigen’s platforms, there’s plenty of cuteness there to last for a long while.