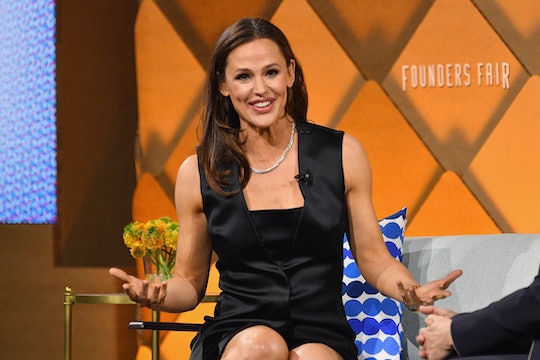 Moms, You Will 100% Relate To Jennifer Garner's Latest Instagram

I don't know about you, but I have a shortlist of celebrity moms whom I simply adore. Kristen Bell, Chrissy Teigen, Cardi B, just to name a few — they're all so refreshingly honest about this whole parenthood business. Sure, they share the cute and fun aspects of caring for little humans. But they also dish on the not-so-pretty parts: Poop, mastitis, anal worms, not sleeping, you name it. Another famous mom I would highly recommend following on social media is Jennifer Garner. Because time and time again, her posts are just so freaking relatable. (Not to mention hilarious.) And honestly, Jennifer Garner's latest Instagram is every parent lugging in their kids' sh*t from the car.

On Monday, the actress and mom of three — Violet, 12, Seraphina, 9, and Samuel, 6 — took to Instagram to share an all-too-common experience of parents everywhere. In the photo, Garner can be seen struggling with an armful of stuff — including a hat sticking out of her mouth — and most of which presumably belongs to her kids. "Every single time I get out of the car," she captioned the shot, according to E! Online. "How? Why?" As parents know all too well, kids are apparently incapable of carrying their own crap from the car and into the house. And so, unless parents want their vehicles to turn into even bigger trash cans on wheels, they're forced to haul it in themselves.

Needless to say, Garner's followers felt her post so hard. One person commented, "When you become a mom, you get 6 extra sets of arms according to kids. Nobody told me where to pick them up at though. #thestruggleisreal."

Another follower wrote," Been there but wouldn’t trade it. They grow up fast but than again as adults they still leave their stuff in my truck."

Yet another person chimed in with, "Every single time!! No one helps or holds the door!"

Another wrote, "And they’ll still be like, 'Mom can you hold this?'"

One follower commented, "Ask the kids to hold ONE THING and suddenly they go limp-wristed like 'I don’t know how to hold things.'"

Another person wrote, "It’s part of our Multi-tasking superpower."

For the record, Garner seems to be on a roll with her recent, ultra-relatable mom posts. Just last week, she shared a look inside of her daily planner — which was apparently hijacked by one of her kiddos at some point. This is evident by the fact that the word "fart" was written in large letters across Aug. 22 and Aug. 23, as HuffPost reported. "Yesss! Moms everywhere relate to this," one follower wrote. "Gotta 💨 sometime! August seems good!"

"I love the surprise messages in my notebooks from my kids," another mom wrote.

Yet another follower commented, "Whoa...watch what you eat on Aug 21st. Could this be a prediction?"

Many of Garner's followers assumed the responsible kid was her youngest, Samuel — which probably has something to do with another photo the actress shared earlier this year. As People reported in April, Garner shared a snap of a message her son, Samuel, wrote on a sticky note. It read simply, "I love farts." Garner hilariously captioned her Instagram post with, "In case Monday has got you down, focus on the little things that make you happy,” Garner, 46, captioned the hilarious image. “#proudmom#ilovefarts#boymom”

To be honest, keeping my car (relatively) clutter-free is a daily battle. That's probably because my three kiddos have a tendency to leave crumbs, snack wrappers, water bottles, toys, hair ties, and other random crap all over the place. Granted, I attempt to force them to carry in their own sh*t when I can. But more often than not, I'm the pack mule transporting items to and from my mini van day in and day out. And I'm right there with you, Jennifer Garner; the first words both of my reading-aged kids' learned to write were — you guessed it — "poop" and "fart."