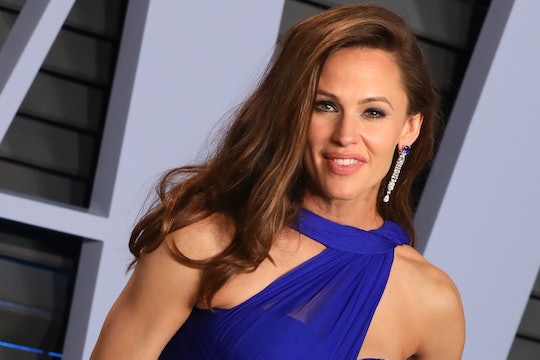 Pregnancy rumors and questions are inescapable, especially when you're a celebrity. Actress Jennifer Garner's response to a fan's pregnancy question is so honest and hilarious that it puts all future pregnancy rumors to rest.

Garner uploaded a video giving fans a tour of her family's farm in Oklahoma, where she introduced her followers to their cows, or what she referred to them as their "walking lawnmowers." "My family farm is, as the kids say, my organic, biodynamic happy place," she wrote in the caption of the post.

The 48-year-old actress looked right at home wearing a striped shirt and super adorable pair of overalls. While most commenters could not get over how cute the cows' names are, one commenter had a question for Garner — "Are you pregnant?" The actress, of course, had an very logical reply to them.

"I am 48, have three healthy kids, and am not — and will never be — pregnant," she wrote. "We can lay that pupper to rest. Have I gained the COVID 19? Possibly. But that is another story."

Garner is the mom to three kids — 14-year-old daughter, Violet, 11-year-old daughter Seraphina, and 8-year-old son, Samuel — with ex-husband, Ben Affleck. And she has been adamant about only wanting three kids in the past. "I think that's enough," she said during an appearance on The Ellen Show in 2013. "I think we have provided the world with enough."

The likelihood of a woman getting pregnant at the age of 45 is no more than 3% or 4%, according to Parents. This, combined with the fact that Garner doesn't want any more kids, means that fans won't see her pregnant again — unless she's playing a pregnant woman in a future acting role.

But it's safe to say that Garner is very happy just simply being a mom of three. Although the actress has admitted that the global pandemic has been hard on her family, she has reiterated how lucky she is in this moment. In June, she sat down with Ellen Degeneres where she shared that her kids have been hanging in there. "Everyone's really good," she said. "They have been great. We have our moments, of course, but I think they really get a call to action of staying put and working hard to keep your chins up. They're cleaning the house and helping out and they've been really good."

Between the cows, the kids, and the coronavirus pandemic, it seems like Garner has her hands full.