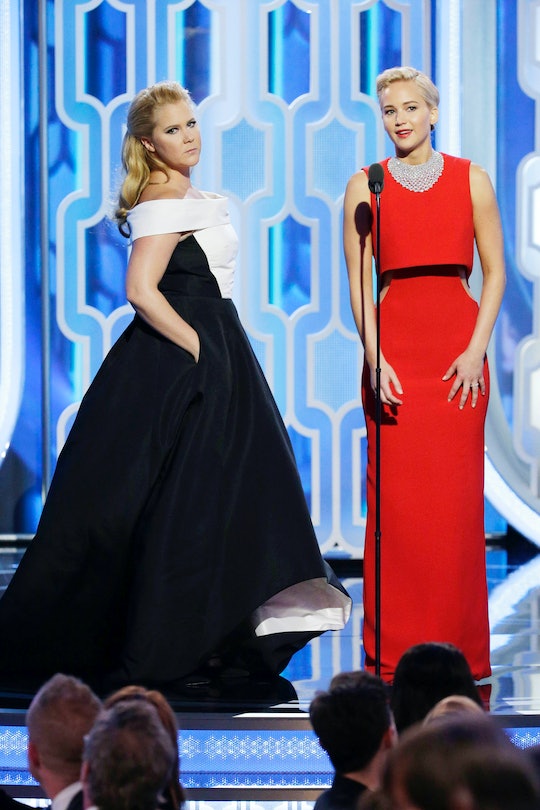 Jennifer Lawrence & Amy Schumer Should Host The Golden Globes, Based On This Clip Alone

After presenting together at the Golden Globes, it's pretty obvious that Amy Schumer and Jennifer Lawrence should host the Golden Globes next year. Or the Oscars. Or the Grammys. Or anything. Hell, everything. They are hysterical. The duo's appearance together tonight has been a huge draw for J.Law and Schumer ever since they were nominated in the same category, Best Actress: Schumer for Trainwreck and Lawrence for Joy.

As they got a little goofier, you could see just how close the two are IRL. It's not some made-up headline just for fun or some to-do they've had to go along with because they're starring in the same film. They riffed off of each other and made each other laugh. And it was genuine. Sure, it was awkward, but what friendship isn't? They weren't goofing either. Their jokes were pretty good commentary about the way they, especially, are treated in their industry and by the media right now. It was smart. Kind of like Tina Fey and Amy Poehler.

Twitter was kind of all about the two friends taking over hosting duties sometime soon. Move over Tina and Amy, looks like these two are coming for you.

More Like This
Turns Out, You Can Dilate Pretty Far Before You Actually Go Into Labor
Toe-tally Cute Summer Pedicure Ideas
What Exactly Are Minions, Anyway ?
Is Salicylic Acid Safe To Use On Skin During Pregnancy?