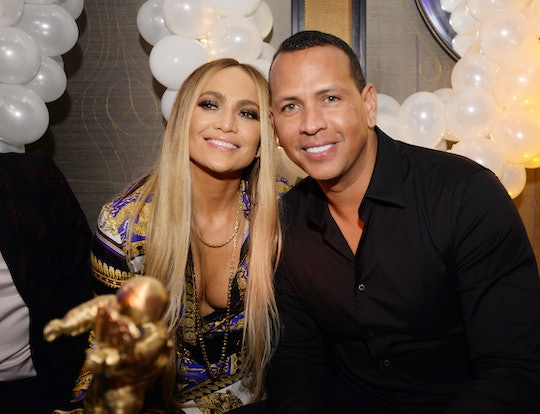 It really does seem like a match made in heaven. Both are famous enough to have paparazzi nicknames, both have kids from other relationships, both have multiple careers and massive empires. But Jennifer Lopez and Alex Rodriguez decorating their Christmas tree with their kids really is a "cute couples alert," and the two seem as smitten with each other in family pictures from their holiday preps as they do when they are posing on the red carpet. As Marie Claire noted, the lovebirds are really, really into each other... and Christmas decorating.

J.Lo's Instagram account showed some serious tree trimming going on, with a very tall tree requiring a ladder, which her twins, Max and Emme, her 10-year-old twins with ex-husband Marc Anthony, were using to the hilt, Marie Claire noted.

Meanwhile, one of A. Rod's two girls — Natasha, 14, and Ella, 10, whom he shares with ex-wife Cynthia Scurtis, as People reported — was also featured on J. Lo's Instagram feed. (It looks to be Ella, as she appears to be about the same age as J.Lo's kids, but I can't promise.)

The results, as shown on Lopez's social media, were as fabulous as you would hope: A huge fir tree decorated with gorgeous round red ornaments and what looks like red silk roses.

"The best times are with these lil ones," the actress/singer/dancer wrote alongside the picture of her very adorable blended family, adding "#ilovechristmastime #familia." On other pics in the series, she wrote, "Have a holly, jolly Christmas" and "that time of the year":

Ever since the two started dating in early 2017, according to Us Weekly, it's been a quick jump to full-family-status for this well-matched pair.

Lopez shared with Vanity Fair that when she first encountered Rodriguez outside a restaurant in Beverly Hills, "I almost yelled out 'Alex', but I am the shyest person when it comes to things like that ... I could literally have just walked away but I walk over and tap him on the shoulder and say 'Hey.' It was just one of those things where you feel compelled to do, something you wouldn’t normally do."

Rodriguez told Lopez she looked beautiful and hours later, called to ask her out, Vanity Fair added. The rest has been #cutecouples history. (As VF quoted the former baseball star as saying, he and Lopez have more in common than you might notice, including a shared pride in Latino heritage and both being Leos. A match made in heaven indeed.)

In case you're worried about things being totally mutual, A. Rod's social media is just as lovey-dovey, including an adorable Thanksgiving post featuring his two kids, J. Lo, and her two kids all snuggling in bed. "Thankful for mornings like this with the ones I love most... I am truly blessed," he captioned the image.

The couple told Vanity Fair that they both did the work necessary to make this relationship work out so well — including being OK with being alone and growing into themselves.

I've never found Lopez so relatable as she seems in this phase of her life, and the two of them seem to make each other better. Marie Claire speculated that a Christmas engagement may be in the couple's near future, but I say, they seem to be doing an effortless job blending their families already, and the rest is up to them.