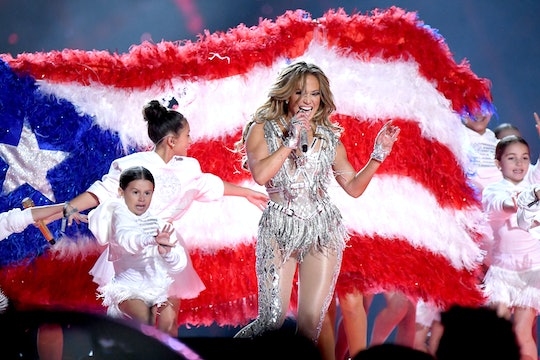 J. Lo Shares What She Wants Girls "All Over The World To Know" After Super Bowl Show

After taking a few days to get her breath back, Jennifer Lopez reflected on her epic Super Bowl halftime performance in a moving statement that broke down exactly why she'd taken on the non-paying gig. While Lopez said she hoped her performance would inspire and empower young girls, a reference to cages and walls in her initial statement appeared to confirm that portions of her act were meant to be a political statement. The singer later edited her statement, however, removing those references.

"All I want my girls, the little girls on stage with me and all over the world to know is how to use their voices and be proud of everything they are." Lopez wrote in a post shared to Instagram on Tuesday. "We are proud to recognize that all of us together are what makes this beautiful country truly great."

According to multiple media outlets, however, Lopez's statement had initially included a line that referenced parts of President Donald Trump's zero-tolerance immigration policies. "Other people can try to build walls, keep us out or put us in cages," The Hill and Fox 61 reported Lopez had written but later deleted.

On Sunday, Lopez's 11-year-old daughter Emme Maribel Muñiz joined her onstage, singing "Let's Get Loud" from what appeared to be an illuminated cage as more than a dozen other children sat inside similar cages around her. When Lopez appeared onstage in a coat that bore an American flag design on one side and the Puerto Rican flag on the other, Muñiz began singing Bruce Springsteen's "Born in the U.S.A." Behind them, red lights were protected in a crisscrossed pattern that appeared to resemble a fence.

The moment is believed to have been a critique of the Trump administration's immigration policies, including a policy of separating families at the border, which saw a number of children held in chain-link "pens" at detention centers across the country. In June 2018, the Associated Press described the conditions at a Texas border control facility in which hundreds of children were being kept: "Inside an old warehouse in South Texas, hundreds of children wait in a series of cages created by metal fencing. One cage had 20 children inside. Scattered about are bottles of water, bags of chips and large foil sheets intended to serve as blankets."

While it's not clear why Lopez opted to edit her Instagram caption, the apparent messages infused into her Super Bowl halftime performance have undoubtedly made a lasting impact.