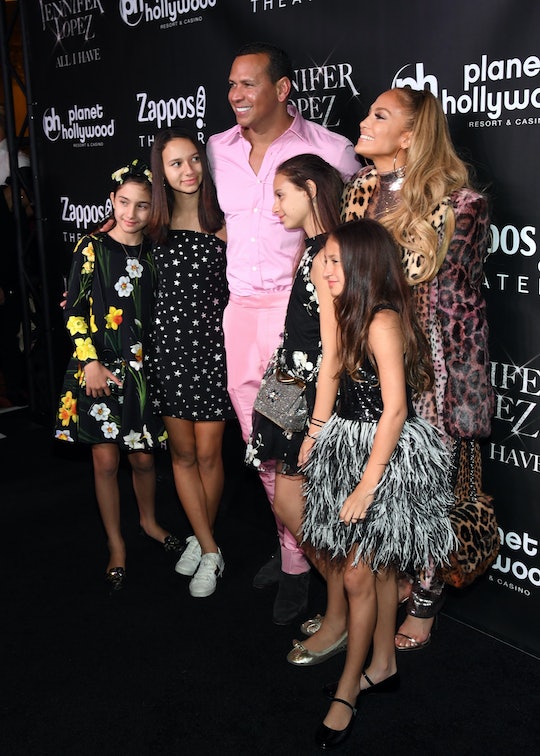 Jennifer Lopez and Alex Rodriguez are one powerhouse of a couple with double the star power. They've walked red carpets, posed for pictures, and rallied for charity but their greatest accomplishment as a couple might just be the melding of their two families. The 49-year-old "Love Don't Cost A Thing" singer graces the cover of this month's People Magazine, and she's sharing some details about how she's made it all work so smoothly. Jennifer Lopez shares how she and Alex Rodriguez's kids have adjusted to blending their families.

While it's true that Lopez is a chart topping singer and award winning actress, her relationship with former major league baseball player A-Rod is rooted in family love.

"We couldn’t have asked for anything better than the four of them getting along as they do," Lopez told the magazine. "We love each other and we love our life together. The exciting part of our love is that we’re both very aware of how lucky we are to have found each other.”

Even A-Rod acknowledges just how lucky he is. “Our kids have become best friends and that keeps us both grounded and appreciative,” A-Rod said to People.

Together the couple have four children from separate marriages. Lopez is mother to 10 year old twins Emme and Max, from her marriage to Marc Anthony. Meanwhile, Rodriguez is father to Natasha, 14, and Ellen, 10, from his marriage to Cynthia Scurtis, according to Pop Sugar. And, according to A-Rod, "they are all best friends."

Both Lopez and Rodriguez are the typical gushing parents, posting photos of their crew during family fun time. Most recently, JLo posted a sweet pic of the kids decorating the Christmas tree together. It can't get any more idyllic than that!

Both stars are divorced, and making sure all the children were comfortable with their new relationship was a smart move that no doubt set a strong foundation for the family to grow on.

A lot of people are in the same boat as Rodriguez and Lopez, as nearly forty percent of marriages end in divorce, according to HuffPost. The most important tool in making sure blended families mesh is patience, Amy Klein, a psychotherapist specializing in family care, told to the HuffPost.

"The most important piece of advice I can give is to take things slowly. Often parents are so anxious to make everything feel right or good that they push the kids together," Klein said. "Allow your children space to feel out the situation for themselves."

Lopez and Rodriguez went public with their relationship back in March 2017 , according to Cosmopolitan. After two years together, it's still unsure what's in store for the couple and their future together as a family. They aren't married, but fans wouldn't be surprised if it happened sometime soon. As for their blended crew, here's hoping we get to see more and more of them on social media. After all, they seem to be pretty good role models for creating a nurturing family environment for their children.

More Like This
Julia Roberts Shared A Rare Photo Of Her Twins Hazel & Finn On Their 18th Birthday
Julia Louis-Dreyfus Holds Hands With Son Charlie Hall At White House State Dinner
It’s Britney(‘s Birthday), Bitch!
David Beckham Impressed Mariah Carey With His Rendition Of "All I Want For Christmas"