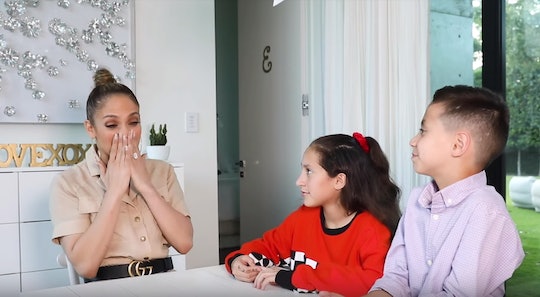 There's nothing quite like finding out you're pregnant. There is such an intense range of emotions that can flood through a person upon seeing that second pink line. Joy, disbelief, panic, fear, wonder — it's a lot to take in. Because everything in your life is about to change forever. Not everyone has a particularly interesting, "how I found out I was pregnant" story. But you can bet J. Lo does! And Jennifer Lopez telling her kids how she found out she was pregnant with them is incredibly sweet.

As you probably remember, Lopez has two children — twins Emme and Max, 11 — with her ex-husband Marc Anthony. Well, the actress/singer/dancer extraordinaire recently held an AMA session with the twins. And the resulting YouTube video, which was published on Monday, April 29, is so fun. At one point, Emme asked, "How did you feel when you found out you were having twins?"

Lopez recounted that she first realized she was pregnant when she was in Portugal, according to Us Weekly. "I was doing a big show. I had just went away for two days. When I sat there, I was in my hair and makeup trailer, and here’s what I felt. In my belly, I felt a flutter," she explained. "I felt like a little butterfly and immediately I knew that I had life inside me. I knew it. It came right into my head." Her intuition, of course, was correct.

Lopez and Anthony later went to her doctor's office to confirm the pregnancy — and they were completely shocked to discover not one, but two babies were on the way, according to the Daily Mail. "The doctor says, 'You see that? That little grain of rice? That's the baby,' and we were like 'Oh my God, we are having a baby,'" Lopez told the twins. "And then he says, 'You see this other little grain of rice over here? That's the other baby.'" She continued:

And I was like 'what?!' and I start laughing hysterically. I just laughed out loud. I couldn't believe it. And that's how I found out I was having twins.

According to People, Lopez also fielded a gutsy question from Emme: "Am I your favorite?" Lopez reacted pretty incredulously. “What!?” she exclaimed, as the twins both laughed, according to People. “I don’t have a favorite, I don’t believe in favorites. I could never think of one of you more than the other. I don’t understand that, I just don’t. I love you both so much."

I don't know about you, but I loved watching J. Lo interact with her kiddos. (And I got a kick out of Max's random dabbing.) She seems like such a fun mama — and it was adorable hearing the story of when she found out she was having twins.

To be honest, Lopez's reaction is probably what I would have been like in the same situation. Wait, scratch that. For me, it would have been laughter followed by tears. Because one baby is challenging enough. But two? All I have to say is kudos to all of the parents of multiples out there. You guys are seriously amazing.