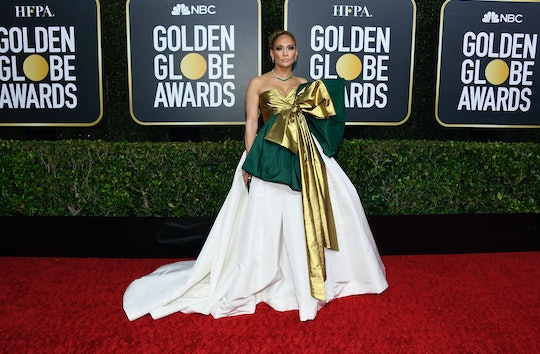 Many good things come wrapped with bows — including Jennifer Lopez at the 2020 Golden Globes. The actress, musician, and Golden Globe nominee showed up in a dress with a larger-than-life bow on it, and she rocked it. It's almost as if Jennifer Lopez's Golden Globes look was a literal gift to us all.

J. Lo is not afraid to take risks on the red carpet. I mean, her Versace dress at the 2000 Grammy Awards is the definition of an iconic red carpet look. Her award show looks have been such a treat over the past 20 years, so it shouldn't come as a surprise that she took that word quite literally. Lopez showed up to the 2020 Golden Globe awards wearing a white ballgown adorned with two giant green and gold bows across her chest. It's a risk, but a risk that she certainly pulled off.

The green and gold dress contrasting against the red carpet certainly drew a lot of comparisons to the recent holiday season. People on Twitter could not stop comparing Lopez to a present or holiday party attendee. Although some people were certain that she drew inspiration from a Christmas tree, it's hard denying the fact that she looks absolutely incredible.

Although Lopez's outfit is a gift to the rest of the world, she's hoping to receive one very special present of her own — a Golden Globe. Lopez is up for an award for Best Performance By An Actress In A Supporting Role In Any Motion Picture for her performance in Hustlers. While she might have looked calm and collected on the carpet, Lopez's fiancé, former baseball player Alex Rodriguez, took to Twitter ahead of the night where he revealed the opposite.

"Jennifer is actually unusually nervous," he said. "She's usually cool as a cucumber but she's nervous, rightfully so."

No matter the outcome of the night, Lopez's look was the biggest present of them all.