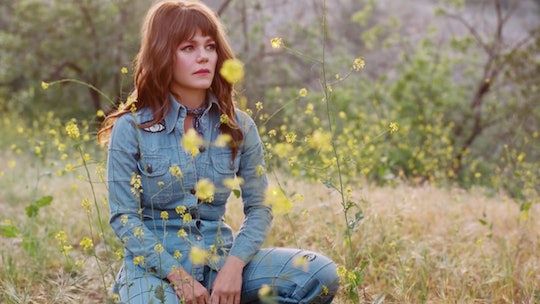 "I've been uptight and made a mess. I'll clean it up myself, I guess. Oh, the sweet smell of success, handle me with care."

What makes some music so special is how its meaning gets transformed for each new set or ears and become a part of that life. For me, when I listen to an album, I can’t help but think about where I was when the words and melodies became a part of my own story. I have this dramatic tendency to feel like I’m living out my own movie, it’s a writer thing, I’m sure. And when I listen to Jenny Lewis, I’m reminded of how her music feels like me growing up and finding my footing as a mother.

My early twenties as a brand-new mom weren’t the first time I listened to Rabbit Fur Coat. Just like a lot of teens growing up in the 2000s, I listened to The Postal Service and Rilo Kiley in my basement bedroom on repeat and in my parent’s minivan as I drove through backroads in the small town where I grew up. Outside of the occasional listen, I didn’t really connect with Jenny Lewis, and her music, until I was through with college, married, and learning how to juggle motherhood for the first time.

Instead, Rabbit Fur Coat became the background music for a time in my life that wasn’t easy. My husband and I became parents when we were young and broke and I found myself working a few part-time jobs by the time I was four weeks postpartum with my first child. We worked opposite schedules and became like ships passing in the night. I spent a lot of time alone, at home with a newborn during the day, and cleaning schools in the evenings after my husband came home from work to put my daughter to bed. I often felt lonely and I always had earbuds in my ears to fill the quiet of that season.

What's a matter with me?

I can see it in your eyes

Lewis has a way of telling stories with her music and those stories kept me company while I scrubbed dozens of toilets and sanitized desks. I listened to the album while sneaking off to pump, something my boss had technically said I couldn’t do. It's a stark contrast to Lewis' life, I know. She began acting in commercials in preschool and moved on to singing and song writing when she got tired of that world. She writes songs about difficult things: her drug-addict mother going through cancer, boyfriends she couldn't communicate with except through song. Still, Lewis and I are both storytellers. We have both used words to create something new with our lives. Because of that, my connection with her music doesn't feel so haphazard.

Becoming a mother was so full of insecurity for me. There was this beautiful baby and I felt she deserved everything but instead got this mom who felt clueless most of the time. And, even though at the time I struggled to find goodness and enjoyment during my everyday life of just trying to make things work, I look back and I’m proud of how resilient we were. I’m proud of how I found ways to make things fun, whether it was listening to music while I cleaned or dragging a quilt out under our big oak tree when naptime wasn’t working.

No matter how stuck or uncertain I felt during those first months of motherhood, music like Jenny Lewis’s took me somewhere interesting and enjoyable while I kept showing up and moving forward with my life, learning to grow under the pressure of all that change.

The other day, I listened to her new album, On The Line. I was driving, headed home from working in my favorite coffee shop for a few hours. I was reminded of the time when Rabbit Fur Coat felt like an escape for me and I smiled at how much things have changed. While her old music once felt so much like just getting by, her new music feels like settling into to who I am just on the verge of 30.

And we had it all

Right from the start

In my world, in this moment in my life, settling is a good thing. Outside of what I can read about her online, I have no idea what Lewis’ life has been like over the last 10 years that I have spent listening to her music, beyond sensing that she feels she has grown into her own life and music. But I know that mine has been about growing up and I’m proud of who I have become. My life isn’t perfect now, but I can honestly say that I like this nearly-30 version of myself. I’m proud of who I am as a woman. I feel secure in how I mother my children, who are hilarious and sweet and brilliant. I’m grateful to have found myself working to support my family as a writer, something that once I felt like an impossible reality. And, when I listen to On The Line, it's about having fun — not because I’m escaping, but because I am present in this moment of motherhood and it’s a seriously good time.