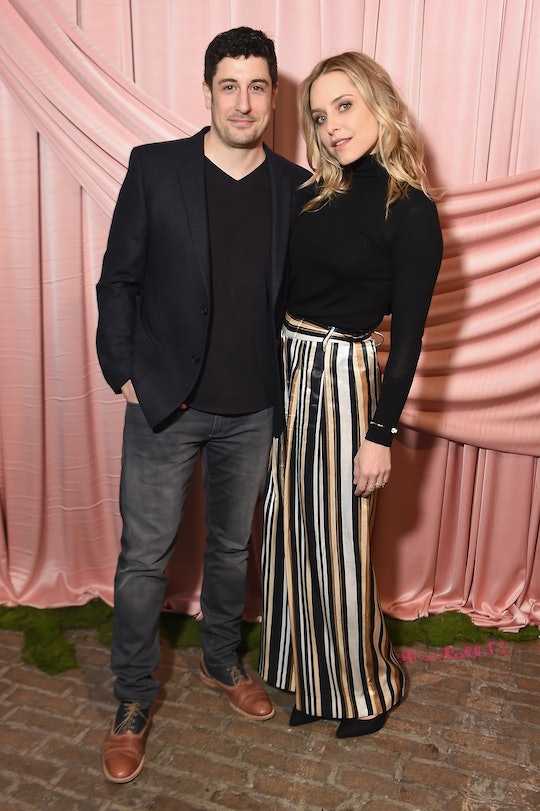 Here's Why Jenny Mollen Shows Her Baby's Face On Social Media, But Not Her 4-Year-Old's

When it comes to sharing photos of their kids on social media, there are essentially two types of parents. Some plaster their newsfeeds with adorable baby photos the second they give birth. Other parents? Well, you probably wouldn't be able to tell they were parents at all, based solely on their social media activity, which is exactly how they like it. Whichever camp a person falls into (or if it's some happy medium), parents have their reasons. Safety and privacy are among common arguments against posting kid photos online. For celebrities, ensuring their kids can enjoy both in spite of their own fame is priority number one. And Jenny Mollen's reason for not showing her 4-year-old's face on social media actually makes perfect sense.

Actress Jenny Mollen and her husband, actor Jason Biggs, have two young sons together: Sid, 4, and 6-month-old Laslo, according to E! News. As fans of the famous couple probably know, their Instagram feeds are filled with kid- and parenting-related photos galore. And they don't sugarcoat the rollercoaster ride of raising two young kids. Not one bit. However, it seems Mollen felt the need to clear up why she avoids sharing photos of her older son's face — even though close-up shots of baby Laslo are plentiful.

“I don’t post Sid's face bc my account is public and not only do I not want him recognized, harassed or interrupted in his daily life, I also don’t think its [sic] fair to expose him without his knowledge and understanding," Mollen shared in an Instagram post on Saturday, People reported.

Laz is still just a head, doesn’t leave the house and is morphing on a daily basis. But soon I will be blocking his face too. Thanks for understanding.

Still, Mollen and Biggs manage to find creative ways to include Sid while documenting their family life on social media — by either obscuring his face, or avoiding the use of straight-on shots. Like this photo of the preschooler looking away from the camera while leaning on his baby brother's stroller.

Or this photo of Sid standing proudly next to a snowman he (presumably) helped build.

Or this photo of Sid giving his brand new baby brother kisses.

And as you can see, glasses and a little facial obscuring made this shot acceptable for social media.

But alas, it seems the time has arrived for baby Laslo. In Mollen's most recent shot that includes both of her sons, Sid had an avocado for a face and Laslo had a croissant placed over his eyes.

Mollen and Biggs aren't the only celeb parents who are concerned about their fame affecting their kids' privacy. That's exactly why couples — like Blake Lively and Ryan Reynolds, and Kristen Bell and Dax Shepard — have remained diligent about not posting photos of their children. (Plus, they've fought against paparazzi being able to photograph celeb kids, too.)

"I'm telling you right now, we don't want our daughter's face anywhere ever until she decides because I have the utmost respect for her," Bell told Access Hollywood back in 2014, in reference to her daughter, Lincoln.

And just this past week, Blake Lively asked fans to delete an unauthorized photo of her daughter, James, Page Six reported. "Thank you for your support but please remove this photo right away," Lively commented on one Instagram fan's account. "It was taken without my knowledge or consent by a man hiding. Thank you!!!!”

Here's the bottom line: Celebrities, in a way, "choose" their fame, and are therefore forced to live with the sometimes unpleasant consequences of it. (Like being followed everywhere by strangers who are shoving cameras in your face.) But their kids? They have zero choice over who their parents are. So if celeb parents feel the need to keep their kids' identities as private as possible — so they can live a relatively normal life in spite of mom and/or dad's fame — then I think that's their right. And it should be respected.