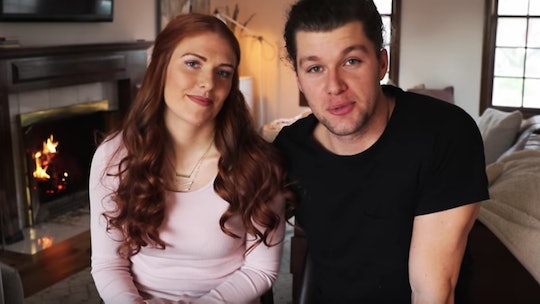 It looks like congratulations are in order for one TLC family (no, it's not another Duggar pregnancy announcement, surprisingly enough). As it turns out, Jeremy and Audrey Roloff are expecting baby number two, and their announcement is incredibly sweet.

As Us Weekly reported, the Little People, Big World stars revealed the exciting news via Instagram on Monday, July 1. "Baby #2 is coming in January!!!," Audrey captioned a series of photos featuring herself, Jeremy, and their 22-month-old daughter posing with a strip of sonograms. "Ember is gonna be a big sister! We are so grateful and excited for this little blessing to join our family."

In case you were wondering, the soon-to-be father of two also shared the same photos on his personal Instagram account. "We’ve got some exciting news: Ember Jean is going to be a big sister!" Jeremy wrote. "We’re very excited to grow our family. Thanks for following our journey and for your continual support of our family."

I think it's safe to say the Roloffs' followers were a tad excited for the reality TV star couple, as based on the respective Instagram comments. One fan commented, "Omg NOOO way!!!!! The best news!!! Congratulations beautiful couple!!!!"

Another follower wrote, "YAYAYAY! Congrats! Ember is gonna be a great big sister!"

Yet another person commented, "Yay! I love it when twins have babies close together!"

If you happen to be an avid Little People, Big World fan, then you already know that Jeremy's twin brother, Zach, is also expecting his second child. Zach and Tori Roloff — who share a 2-year-old son, Jackson — announced in May that they would be welcoming a baby girl.

"Zachary and I are so excited to announce that Jackson is going to be a big brother!" Tori wrote on Instagram at the time. "We are expecting a sweet baby girl this November! Thank you so much for always supporting our family and loving us!"

It shouldn't come as huge surprise that Jeremy and Audrey are expecting another baby. In April, the couple talked openly about their plan to add to their family one day.

“We’d like to have more kids,” Jeremy told In Touch Weekly in April.

Seriously, though. How cool is it that cousins Jackson and Ember Roloff are both so close in age — and now their younger siblings will be, too? It's almost like there will be a whole new generation of Roloff twins!

I would imagine it's a neat experience for Audrey and Tori, too. Having a sister-in-law walking through similar stages of pregnancy and motherhood at the same time means there's always someone who "gets" what you're going through — someone with which to compare notes or to complain.

And hey, it also helps keep Zach and Jeremy's twin rivalry going strong, too. Congrats to Audrey and Jeremy on their happy news!