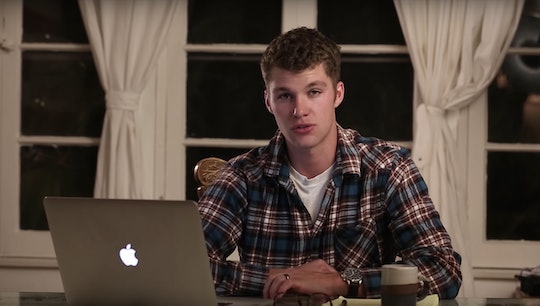 Sometimes, I can't help but wonder why celebrity parents even bother posting photos of their children. Every action, every outfit, every moment is scrutinized by some unseen panel of parenting experts and the shaming just never ends. Case in point, Jeremy Roloff is being dad-shamed over another photo of baby Ember. This time, he had the audacity to throw her into the air and catch her. I know, I know; how dare he?

The photo in question, posted on Sept. 30, shows Roloff, dressed in all black, tossing little Ember in the air in front of a Nashville mural. The post came after a visit to the city to promote his and his wife's book, A Love Letter Life. "Spent a few days in Nashville and now we’re in Franklin, TN. Such a lovely town. Although it reminds me of Bend - almost too popular to enjoy now! But still, a beautiful town and we always enjoy our time down here," he captioned the post. "The people are great and the hospitality is noticed!" Unfortunately, the hospitality seemed to end on Instagram, as his followers were a bit more concerned with his parenting than his book.

Rather than appreciate the sweet father-daughter moment, or Roloff's impeccable ability to match shades of black, many of his followers chose to weigh in on — read "shame" — his parenting abilities. One person wrote, "Idiot. She's not a circus act." While another added, "Wow. Be careful throwing your kid like that." Yet another chimed in a bit dramatically and said, "Shaken baby syndrome. his is not a good idea."

Aside from the obvious fact that Roloff isn't actually shaking his daughter, there is plenty to object to in these comments. Fortunately, not everyone is out to put him down. Many of his fans came to his defense, saying that he is a good father. One such good Samaritan wrote, "You can feel the love oozing from this photo. You and @audreyroloffare amazing parents. Little Ember is one lucky lady!" Another pointed out the ridiculousness of criticizing parents online. "I love how somebody post[s] a cute picture and people have to find the negative and it [is] totally ridiculous," they said.

Along with defending her dad, many fawned over baby Ember, with one writing:

Ember is such a gorgeous baby! And so much character in that little face of hers! I bet you have a hard time staying mad at her for ANY reason when she flashes you a little grin or something. I suspect she's a charmer! Especially with Daddy!

Roloff hasn't responded to his critics as of yet, but he has some experience in the parent-shaming department. When he posted a photo of Ember in June to memorialize her turning nine months old, people came out of the woodwork to put him down. He captioned the photo:

9 months has come and gone. Do they just continue to get cuter? How does one handle cute aggression ? Because let me tell ya, it’s a real thing! So honored I get to be her dad.

While his post was clearly made with good intentions, not everyone saw it as such. The way in which he was holding her, namely the placement of his hand, had people making some really ugly accusations. "It looks so creepy with the hand between the legs," one wrote. Another had similar feelings and said, "You're holding her by her crotch?!" People also made some awkward comments about how his hand looked. As one user put it:

Yikes! That hand placement tho [sic]! At first glance looks like a giant vag [sic], she's a beautiful baby but might want to delete this one, or photoshop some bloomers on her.

If these negative comments make you cringe, take comfort in the fact that Roloff isn't letting the negativity get him down. He is soaking up all of the time with his sweet Ember that he can.