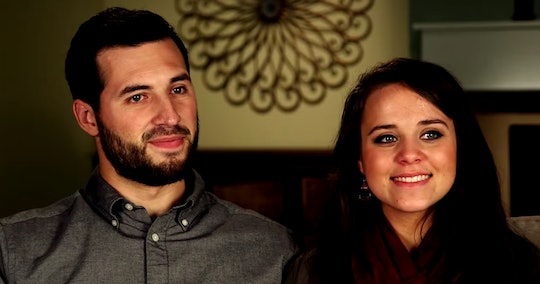 When Jinger Duggar first entered a courtship with Jeremy Vuolo in 2015, fans were super excited for the couple. Their whirlwind romance was documented on TLC 's Counting On. Now, just three years after they first met, the two have celebrated some very special milestones together and clearly have so much love for one another. And Jeremy Vuolo's sweet and extravagant anniversary gift for Jinger Duggar is no exception.

In a preview for the newest episode of Counting On, which airs next Monday on TLC, according to People, Vuolo decided to surprise Duggar for their first anniversary. He did this in two ways — by having some of her family members (including her parents, Jim Bob and Michelle Duggar) fly out and surprise her and by gifting her a brand new piano. In the clip, when Duggar saw the piano, she couldn't believe her eyes. "Jeremy," she stated. "How is this possible?" "I love it," she added. "I can't believe I have my own piano."

Because the episode hasn't aired yet, it's unclear if Vuolo got a special discount for it or purchased it secondhand. And fans might be curious about its price tag since Vuolo stated in the clip that he "pulled a few strings" to get his wife the piano.

The gesture of Vuolo buying his wife a piano on their first wedding anniversary is incredibly romantic — but at the same time, it's a huge gift. A Yamaha upright piano, like the one shown in the clip, retails for $11,000. But, of course, Vuolo could have purchased the piano secondhand or got an amazing deal on it.

No matter the cost, you can tell in the clip that Duggar loved the piano. "Thank you so much," she told her husband in the clip. "I love it."

Duggar and Vuolo celebrated their one year wedding anniversary on Nov. 5, 2017, after the couple wed on the same day in 2016, according to Us Weekly. This means that this season of Counting On is just a little behind when it comes to keeping up with all of the very exciting things that have happened in the Duggars' lives this past year (like the birth of their daughter in July). Most importantly — this also means that their second anniversary is just three months away. If Vuolo gifted his wife such an amazing present for their first anniversary, it might be a little hard for him to follow up for the next year.

Although the gift might be a little large, it is clear that Duggar was so incredibly happy to have a piano of her own. Fans of Duggar might not know that she is a very talented piano player and loves to play — hence her reaction to the gift. In 2016, right before Duggar walked down the aisle at her wedding, she played the piano (in her wedding dress) to calm her nerves, according to InTouch Weekly.

Just look at this video of Duggar playing piano in church — she is powerful when she plays. Since the piano brings her that much joy, it's obvious that Vuolo knows exactly what he was doing when he bought his wife that gift.

So the piano might not hold any symbolic meaning for their first anniversary but is clearly a gift that is near and dear to Duggar's heart. Who knows? Maybe Vuolo will give his wife something just as good for their second anniversary.