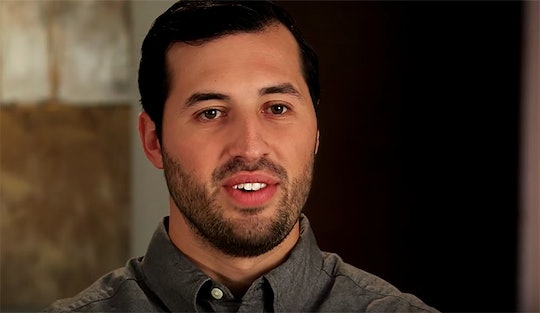 Counting On star Jeremy Vuolo was on top of the world when he and Jinger Duggar welcomed their first daughter, Felicity, into their family on July 19. Similarly to other first-time parents out there, Vuolo was intoxicated by the high that comes with creating a life, and he couldn't stop gushing about his newborn. But now that Vuolo has had some time to settle into fatherhood, it's safe to say he's become well acquainted with the realities of parenting. Case in point: Ben Seewald revealed on July 23 that Jeremy Vuolo's self-appointed dad nickname is "meconium man." For those who aren't aware of what meconium is, it's essentially dark green infant poop. Raise your hand if you can relate to this hysterical yet disgusting moniker, parents.

When Felicity made her grand debut, Vuolo and Duggar took to their family website to share a heartfelt message about her arrival. "God is so kind! Jinger gave birth to Felicity Nicole Vuolo this morning at 4:37 am. Felicity weighs 8lbs. and 3oz. and is 19.5 inches long," the joint statement read. "Both mom and baby are healthy, doing great, and resting well. We are very thankful for her safe arrival and look forward to life as parents!"

To make the sweet moment even cuter, the new parents also shared their first family portrait together. Cue the awws.

Of course, parenthood is more than cute photo-ops and social media posts, a fact Vuolo learned rather quickly. Just four days after Felicity entered the world, Vuolo took to Twitter to share some hysterically real updates on #dadlife.

“To Sleep, my dear friend and faithful companion,” Vuolo penned, according to Twitter. “So long. It’s been a good ride. Fondly, Jeremy.”

Vuolo also bid sweet farewell to coffee, writing one day later: “To coffee, It’s just you and me now. Don’t let me down. Gratefully, Jeremy.”

Yep, I think many parents out there know exactly what Vuolo felt like in his first few days of parenting. It's never easy saying goodbye to the things you once took for granted, is it?

But wait — the hilarity didn't stop there. On the same day Vuolo penned his wistful ode to sleep, his brother-in-law, Ben Seewald, revealed his self-given dad nickname — "Meconium man."

As I mentioned before, meconium is a not-so-glamorous substance that exits an infant during their first few days and weeks of life. Meconium is thick, sticky, and generally unsightly, so I'm not too surprised Vuolo conjured up a cute moniker to make it through the meconium hump. You gotta do what you gotta do to get by, right? Not to mention, it's nice to see Vuolo's sense of humor shine in a sh*tty (I couldn't help myself) situation.

After Seewald revealed Vuolo's alter ego, fans took to the post's comments section to share advice and anecdotes about this unavoidable phenomenon.

"My husband said those were the best poops to change because they were easy and not so smelly," someone commented on Twitter.

"This is an interesting statement that Mr @jeremy_vuolo made but I guess that would make sense," another added. "I’m sure there r many other parents who can relate 2 @jeremy_vuolo in this instance. Hopefully Miss Felicity Nicole’s diapers will be rid of that soon #baby."

And one fan advised:

Ha! Good times! Are you spreading a little olive oil on Felicity’s skin when you change her diaper? That’ll keep that wonderful meconium from sticking. Keep it up, Jeremy. Diaper duty is no joke. Your changing diapers, though, will be a huge blessing to Jinger as you know.

"Good times," indeed. It's obvious Vuolo has a good support system to get him through these first few months. This is just another example of how social media can bring parents together in a positive way.

So, here's to Meconium Man, aka new dad Vuolo. I wish you the best of luck as you wage your battle against this villain first-time parents know all too well.