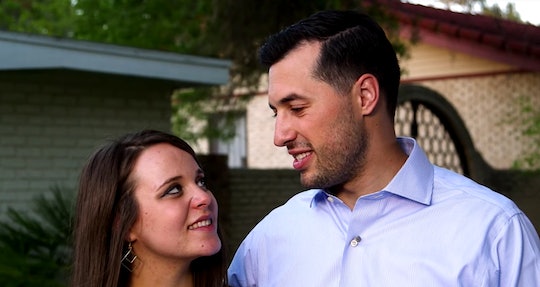 Get Excited, Because Jeremy Vuolo Revealed Jinger Will Welcome Their Daughter "Soon" — PHOTO

It's hard to believe that the newest addition to the Duggar family will be here any day now. When Jinger Duggar and Jeremy Vuolo first announced that they were expecting their first child together at the beginning of 2018, fans were excited to follow along with yet another Duggar pregnancy. And now, almost six months after that initial announcement, the excitement has only intensified. As if fans weren't already looking forward to the Counting On star giving birth, Jeremy Vuolo's photo with Jinger from this Saturday not only showcases her bump as she enters her final leg of pregnancy, but it also mentions their baby's estimated time of arrival, which could be sooner than fans expected.

In Jeremy's newest Instagram post, he and Jinger could not look any happier to be expecting their first child together soon, as they both cradle the expectant mama's bump in the photo. The happy couple will welcome a baby girl, according to TLC, sometime in the near future. Although the photo seems to indicate that Jinger has not given birth yet, it sure looks like it'll happen very, very soon. In fact, Jeremy's hilarious and succinct caption on the new photo made that clear.

This makes sense, especially given Jinger's reported due date. Shortly after she first announced that she was expecting, fans were able to deduce that Jinger and Jeremy were expecting their first child together in July, according to In Touch Weekly, after Jeremy's church website included that he was expecting his first child "in July of 2018" in his pastor biography page. Since July 1 is exactly one week away, it's pretty much a given that Jeremy and Jinger's baby will be here before fans know it. Seriously, it could be any day now.

If fans have been keeping up with Jinger's bump updates, which she has routinely been posting to her Instagram account since her initial announcement, then they're pretty aware of her progress. Sure, Jinger hasn't posted a new bump update since the beginning of June when her baby was still just the size of a cantaloupe. But, if she has been posting her updates on the exact weeks of her pregnancy, then she is likely 37 weeks along at this point.

While an average pregnancy lasts about 40 weeks, according to CBS News, expectant mothers are considered to be full term between 39 and 40 weeks. Of course, many mothers also safely deliver their babies at about 37 weeks, according to Fit Pregnancy, so Jinger could really give birth to their daughter at any point in the near future.

In the comments section of Jeremy's Instagram post, fans are getting pumped for their baby's imminent arrival. "I can't wait!" one fan wrote. "Come on!!" another fan chimed in. "I really want to see that baby!!" Needless to say, they're really, really, excited. "I am so so excited to see your little blessing soon!" yet another fan wrote. "Jinger is gorgeous and y'all will be such amazing parents."

Just like her due date, a lot about Jinger's pregnancy and their baby-to-be is still unknown. In fact, fans have been going wild as they come up with potential baby names for Jinger and Jeremy's little girl. But given how amazing the couple has been with updating their fans during this journey through their first pregnancy, there are do doubts that they will let fans know when Jinger does ultimately give birth.

And judging by Jeremy's most recent Instagram post, that could be any time between within the next few days or upcoming weeks. The countdown for Baby Vuolo's arrival is full swing now!