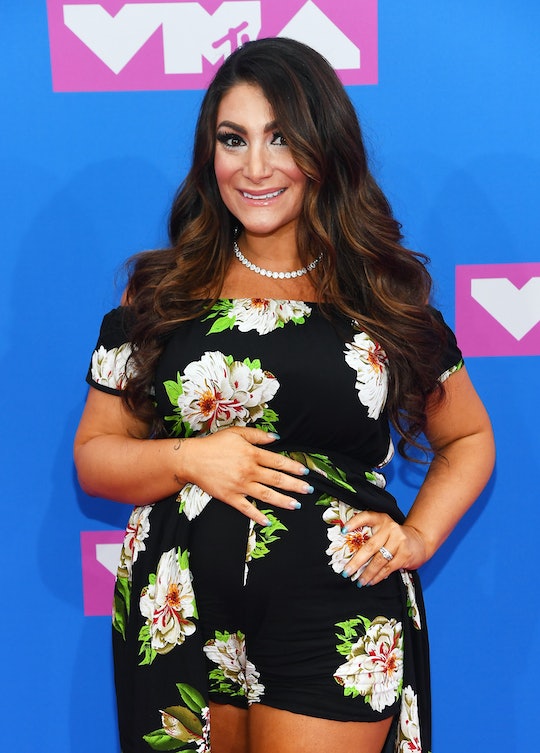 The internet is full of quick hacks to help expectant moms who are close to their due date induce labor. Recently, Jersey Shore's Deena Cortese began using a common pregnancy hack to help her prepare for her own labor with her first child. Of course, you should always consult your doctor before trying something, but it's pretty popular and looks pretty fun, if you ask me.

Cortese is due to have her first child with husband Christopher Buckner just about any day now. Just this week, Cortese shared a photo of her bump and told some fans in the comments section that her due date was about three weeks away, meaning she's expected to give birth at the end of December.

Then in an Instagram post shared over the weekend, Cortese shared herself a boomerang of herself bouncing away, captioned: "Sunday morning peanut ball session."

You might be wondering what the heck a "peanut ball" is. Most people have heard of birth balls, it can be used to relieve back pain, stress or anxiety, and may reduce pain during labor, according to Mama Natural.

A peanut ball is essentially another version of a birth ball. Unlike birth balls, peanut balls have an oblong shape, being larger on each end and slightly narrower in the middle (hence the name). They can be used for every type of birth, according to Baby Chick, but are super helpful for women who are in bed during labor.

Fans commented under Cortese's video to share their own experiences with the peanut ball and offer support.

"The peanut ball dilated me from a 3 to a 10 in less than 2 hrs!! I stayed at 3cm for over 12 hrs. Loveee it. Recommend it to every pregnant momma i know," one user shared.

"I’ve know plenty of people who’s [sic] babies were high and as soon as labor starts those little suckers drop right down to where they need to be. You’re also a tiny lady so your pelvic area is smaller. Don’t worry. You will feel him down there soon enough lol," another said.

"L and D nurse here 🙋‍♀️ Peanut balls are magic!!! There are so many positions you can use the peanut ball in. The peanut ball is especially helpful in labor," one fan commented under Cortese's video.

Cortese herself even helped to educate fans a little on peanut balls.

"I've literally never heard of a peanut ball. Is there a difference?" one fan asked, after Cortese responded to a comment to say the doctor and maternity nurses recommend she use one.

Another fan commented to ask, "When are you due? Love you."

So it makes sense why Cortese is using a peanut ball. Birth balls and peanut balls can both be used to help a baby's head "drop" lower into your pelvis. But everyone knows how babies are. Due dates are more kind suggestions than a guarantee. About 80 percent of women will deliver sometime between 37 and 42 weeks, according to Parenting.

With that said, it sure seems like Cortese's little meatball will be here any day now.