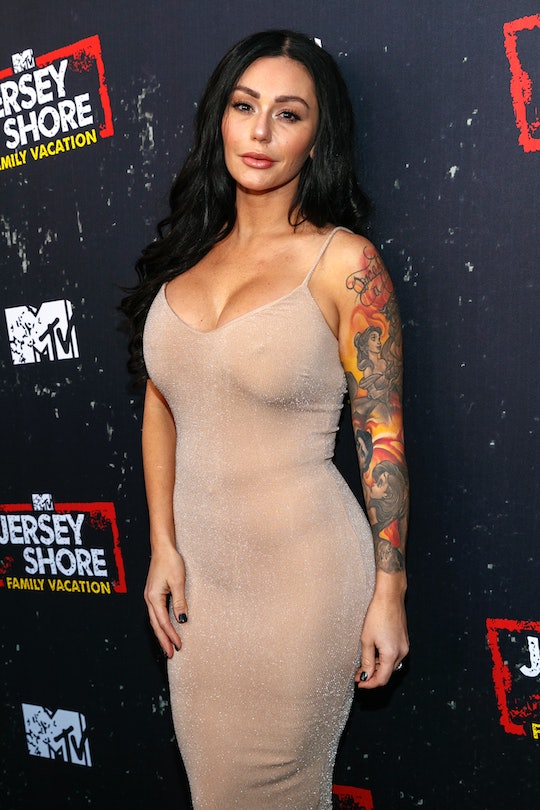 'Jersey Shore's JWoww Revealed She Had A Miscarriage, & Her Honesty Is So Powerful

A revival of the popular Jersey Shore reality TV show recently debuted on MTV, and fans of the original program could not be more thrilled. Former housemates from the show are back, including Deena Nicole Cortese, Paul “Pauly D” Delvecchio, Jenni “JWOWW” Farley, Vinny Guadagnino, Ronnie Ortiz-Magro, Nicole “Snooki” Polizzi, and Mike “The Situation” Sorrentino. On Jersey Shore: Family Vacation, cast members discuss episodes and seasons from the original Jersey Shore, and on the April 12, episode, JWoww and The Situation reportedly discussed Season 4 of the show, which filmed in Italy. JWoww revealed she had a miscarriage around that time, and that's part of why she was "a mess" in Italy, according to Us Weekly.

JWoww told Sorrentino that she and her now-husband Roger Mathews experienced a miscarriage before they filmed the fourth season of the MTV series in 2011, according to People. She said not a lot of people know what happened, making it different from the miscarriage scare she had when she was expecting her first child, which JWoww once wrote about on her blog very openly.

JWoww and Mathews now share two kids — Meilani and Greyson — together. But just because she has two healthy, happy kids now doesn't mean she didn't suffer because of the difficult loss of another wanted baby back in 2011.

JWoww talked about the experience on the show, and she told Sorrentino “I was a mess in Italy," according to Us Weekly. She went on to explain, according to Cosmopolitan:

Right before Italy, like three or four weeks before Italy, my grandmother passed. And me and Roger actually lost a baby, like I ended up pregnant. Not a lot of people know. And they put me on medication because of it, because I, like couldn’t handle life.

And to make matters worse, JWoww struggled with the medication she was put on after that incident. She said, according to Life&Style:

It was making me so groggy, then I started taking uppers with it.

JWoww reiterated just how bad the whole thing was, and I can't really blame her. It was clearly a very difficult time in her life, one that she hasn't felt very comfortable sharing with others until now.

When she was pregnant with her first child, JWoww wrote on her blog that she was briefly afraid that she had miscarried that time, too. She was on a work trip to a tanning convention in Nashville with Snooki, and wrote that at the airport, when she "went to the bathroom, I saw blood and panicked." She continued, according to NJ.com:

I felt a loss like no other when I thought that I was no longer pregnant. I whispered it to Roger and, for that whole ride, we just stared straight ahead and didn't say a word. I went to bed that night in Nashville praying it was just a thing that happens.

Thankfully, it was a false alarm. There are probably a lot of people who can relate to both JWoww's past experience with a real, tragic miscarriage, and with a scare like the one she had before welcoming her first child.

The American Pregnancy Association reported that studies show anywhere from 10-25 percent of all "clinically recognized pregnancies" will result in miscarriage. And while the Mayo Clinic reports that a relatively small number of women — around 1 percent — will experience two or more miscarriages, miscarrying at least once is not totally uncommon, and there are plenty of people out there who understand exactly what JWoww went through.

Miscarrying can of course be a tragic experience for anyone, and JWoww was also dealing with a death in the family around the same time. But as tough as it was for her to undergo, her fans seem to appreciate JWoww sharing her experience with the world. Maybe if more people hear about and talk about miscarriages, the stigma surrounding pregnancy loss can be gradually erased, and fewer people who have dealt with it will feel alone in their own experiences.