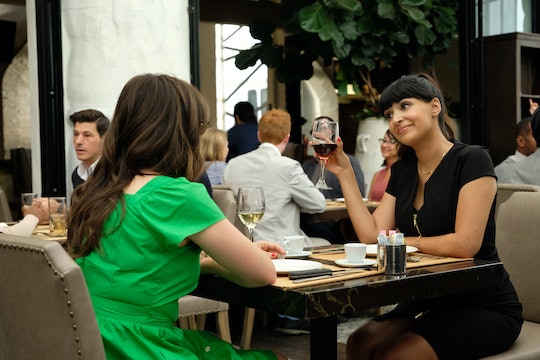 New Girl is definitely all about the laughs, but sometimes the show digs deep and discusses some very real issues. For example, when Jess got hired to work for her ex, Russell, she was initially excited to get to work and start making a difference. However, she soon ended up feeling like she was being left out of important conversations because she's a woman, which became a topic she and Cece discussed over a power lunch. In short, New Girl addressed how women often get excluded in the workplace, and unfortunately, it's a subject that's way too relatable.

Jess was supposed to be helping Russell build libraries, but instead she was given a lot of busywork, such as going through a list of contacts to make sure their numbers haven't changed. Russell also had a weekly meeting on Tuesdays that Jess was never invited to. It was later revealed that Russell's Tuesday meeting was actually for divorced fathers, but her concerns still touched on a valid point that many women are forced to deal with on a daily basis. And it turned out, that Cece understood exactly what Jess was going through.

When Jess confided in Cece, she revealed that she'd gone through something similar now that her modeling agency was merged with one that is run by men. In a flashback, Cece was shown breast pumping in the middle of a meeting because when she asked if the meeting could be moved so she could pump in private, the men in her office refused to reschedule. Similarly, Jess also had a flashback to her first job as a teacher in which she was the only woman in the meeting and every time she made a suggestion, they ignored it until a man said the exact same thing and was then promptly praised for the suggestion.

Unfortunately, this is actually a common experience for women. A report published by the Academy of Management Journal last year revealed that opinions voiced by women in the office are often ignored, while men who engage in the same kind of behavior are rewarded. Elizabeth McClean, the study's lead author told Moneyish, "It comes down to the legitimacy of men versus women in the workplace. It's more legitimate for a man to engage in these...more assertive behaviors, and it's less so for women." She also added, "It's a cultural thing."

With the help of alcohol and coffee, Jess and Cece decided they wouldn't stand for the injustice anymore and busted into Russell's meeting. Although it turned out Russell had good reason for not inviting Jess to the meeting, Jess still didn't back down, noting that even if she was wrong about the meeting, she wasn't wrong about the lack of real work she'd been given. She explained to Russell that she was more than capable to take on real responsibilities instead of just busy work, and thankfully he listened. Jess also made a point to ask for tampons in the women's bathroom, because that's an essential too.

Thus, Jess proved that while it can be hard for a woman's voice to be heard in the office — especially in an office mostly run by men — you should never give up. Speak up when you can and like Cece did for Jess, support other women in the office when they speak out as well. The best way to make sure women are heard is to support them, because unfortunately, sometimes the only people who will have a woman's back is another woman.

Hopefully, in the next episode we'll see Jess doing what she loves and helping to build libraries instead of just making phone calls. Perhaps we'll also see Cece stand up to her colleagues as well or better yet, strike out on her own again. If anyone can run their own business it's Cece.