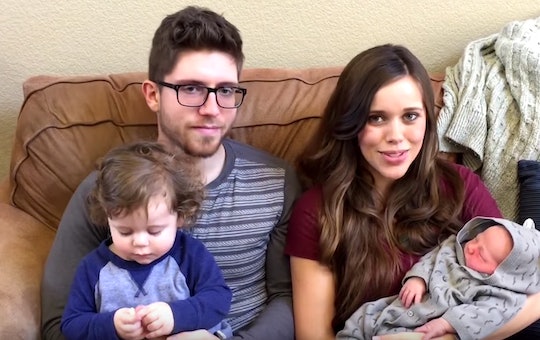 If there is anyone in this world who has a wealth of experience when it comes to juggling a busy home life, it's Jessa Seewald — or as many fans know her still, Jessa Duggar. The Duggars — comprised of 19 children, mom Michelle, and dad Jim-Bob — are famous for their family's size and having cameras follow them around on TLC's 19 Kids And Counting for seven and a half years. Now that she's grown up and moved on in life, Jessa (now the star of the series' follow-up Counting On), has a buzzing life of her own with husband Ben Seewald and her two sons — and Jessa's family photos prove just how important documenting her own, much smaller family is to her.

Jessa married Ben in November 2014. Since getting married, the two have been busy and have gone on to star in the aforementioned spin-off series, Counting On, which follows the older daughters of the Duggar family. And in those three years of marriage, Jessa and Ben have become parents, welcoming their first son Spurgeon over a year ago and their second child, Henry, in February.

Although the couple is still appreciating life with their newborn, they're looking to grow their family in the future. "It will be a little while since we just had a baby, but adopting and fostering to adopt is very much in our hearts," Jessa told People. While it might be a little while before Jessa and Ben expand their household, their family photos show that what they have, for right now, is enough.

Check out their cutest snaps below:

Jessa's Instagram is filled with pictures of Spurgeon, who is 15 months old. The little boy could not be more adorable, with his curly hair, expressive eyes, and distinct personality. And Jessa seems pretty proud of her eldest son already, too. "You never realize the responsibility of being a parent until you have a baby yourself," Jessa told People shortly after Spurgeon was born.

Spurgeon's little brother, Henry, has also made a number of appearances too, despite being only 1 month old.

While her labor with Henry was reportedly more calm and relaxed, according to People, Jessa is having a difficult time teaching Spurgeon "how to be soft" with the new baby — a problem most mothers of young children deal with. Regardless, the family appears happy and excited about life with the new addition.

Jessa might grown up around cameras, having her life documented, but her own family photos prove that she's totally OK with that — and this time around, it's she's doing it on her own terms.