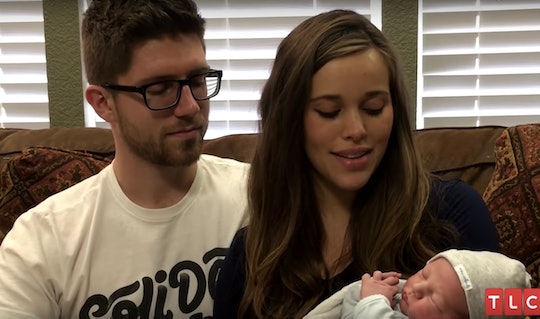 Jessa (Duggar) Seewald knows what it is like to have young kids in the house —her family, the Duggars, are famous for it. Jessa is one of 19 siblings who were documented on the TLC show 19 Kids And Counting. While she may not be living with 19 other siblings anymore, she did recently bring her own new addition into the family with husband Ben Seewald. And on Wednesday, Jessa introduced her new baby to the world in a sweet new family photo.

Jessa and Ben welcomed their new baby boy this past Monday, and just two days later, shared a photo of their new family of four with People. The Seewalds are already parents to son Spurgeon, who is 15 months old. But while they did share photos of their brand new bundle of joy, the parents are not yet sharing their new son's name, just yet — for good reason. "This baby is probably going to have a unique name, kind of like Spurgeon's," Ben said in a TLC digital exclusive. "We haven't quite settled on a name yet. We've got some pretty good ideas but we want to make sure before we make it official."

In lieu of a name, the couple shared an additional, solo shot of the new baby boy on their blog.

The couple first announced they were expecting their second child back in August, according to Entertainment Tonight, and waited to share the sex of their baby until a few months later. But the couple predicted early on that it was a boy, long before seeing the anatomy scan, saying in a video on TLC's website, "We both kind of feel at this point that it's a boy but we haven't had an ultrasound to find yet," Jessa said. Their gut feelings were right — their child is a boy and he's an absolutely adorable one, at that.

Jessa's upbringing might have rubbed off on her, according to Us Weekly, as the couple have been open about wanting more kids and even adopting in the future. "I would love a house full of kids," Duggar told Us Weekly. "Ben jokes about wanting 15 sons, but I imagine we'll probably have a good mix of girls and boys." With the addition of this new baby boy, Jessa and Ben are definitely one step closer to that goal — even if Ben was joking.

But just because Jessa is open to having more kids in the future doesn't mean she'll be doing everything exactly like her mother, Michelle Duggar. Last April, Jessa told Us Weekly, "Spurgeon is still pretty young, but I'm sure that as he continues to grow, I will find that I tend to do some things differently than my mom did. Thats the beautiful of the individual family, no one is identical."

Jessa will definitely get that chance to learn more about her own unique parenting style, with the new addition in the family. But for now, it's safe to say she, Ben, and Spurgeon are enjoying a little quiet time together, and sharing their joy with the world.