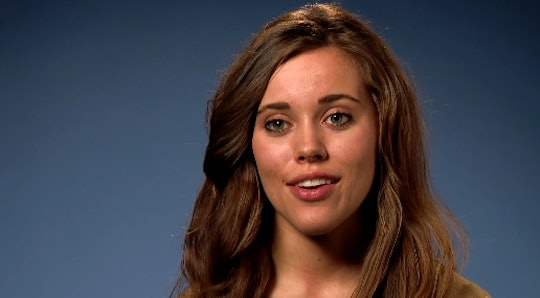 That Jessa Duggar Pregnancy Rumor Is Definitely Not True, So Fans Can Relax (For Now)

If there's one thing that will get the Duggar family back into the news, it's a pregnancy. A wedding or courtship for one of the family members will do the trick too, but fans of Counting On get especially excited when a Duggar pregnancy is announced. Recently, rumors spread that Jessa Duggar Seewald is expecting her third baby, but Jessa Duggar is definitely not pregnant, at least, according to a family spokesperson, so fans of the Counting On reality TV star can calm down — for now.

A Duggar family spokesperson exclusively told E! News on Thursday evening that Jessa is not pregnant. Now, there's of course still a chance that that spokesperson is lying, but that wouldn't exactly endear the Duggar family to fans who have been anxiously awaiting word whether the rumors are true, and they have no real reason to lie about it. It's not like there aren't several other Duggars who are pregnant, so it'd be a little weird to pull a fast one on fans regarding this particular Duggar daughter.

Despite tabloid reports to the contrary that began to surface this week claiming Jessa, 25, is expecting her third baby with husband Ben Seewald, 22, it sounds like they're still just parents of two little boys for now. But if past comments the couple have made can be believed, there are probably going to be more babies in their future — just not right this second.

In February 2017, not long after her second son was born, Jessa told People:

It will be a little while since we just had a baby, but adopting and fostering to adopt is very much in our hearts.

So adoption is definitely one way Jessa and Ben are considering adding to their family, which is still relatively small compared to the one Jessa grew up in. She's one of the 19 kids from TLC's 19 Kids and Counting, born to Jim Bob and Michelle Duggar of Arkansas. But so far, she's a mom of just two kids herself — Henry Wilberforce Seewald, 13 months, and Spurgeon Elliot Seewald, who is 2, according to The Daily Mail.

For a lot of families, two kids is more than enough. But when it comes to the Duggars, there's constant speculation about who's pregnant and how many babies each of the Duggar children will have themselves. Speaking of, there are currently a few Duggar grandkids on the way, but Jessa isn't one of the members of the super-sized family expecting any of them.

Jessa's sister, Jinger Duggar Vuolo, is currently expecting her first child with her husband, Jeremy Vuolo, according to People. They haven't announced the sex of the baby, but they reportedly said in January that they have a sense it will be a boy.

Joseph Duggar and his wife, Kendra Caldwell Duggar, announced in December that they are expecting their first baby as well, according to E! News. And Joy-Anna Duggar Forsyth welcomed her first son, Gideon, in February, according to Us Weekly. So there's really no shortage of pregnancies or new babies in the Duggar camp, even without adding a pregnant Jessa into the mix.

So far, there are 10 Duggar grandbabies, according to In Touch Weekly. And the family is very likely to end up with many more once all of the 19 kids in the family who want kids have them. Jessa, in particular, has said in the past that she and Ben are planning for "many future babies," and once told People:

Ben and I still have a deep desire to adopt, and it’s something we continue to look into...We’ve also talked about fostering to adopt.

We’re already going to have two babies in a two-bedroom house. So I’m thinking, we’ll have to upgrade to a three-bedroom.

So they certainly seem hopeful that they will have at least one more baby to add to the family. But for now, Jessa seems content to be a mom of two, and Counting On fans will just have to be patient and wait a little longer for a real, confirmed pregnancy or adoption announcement from her or Ben in the future.