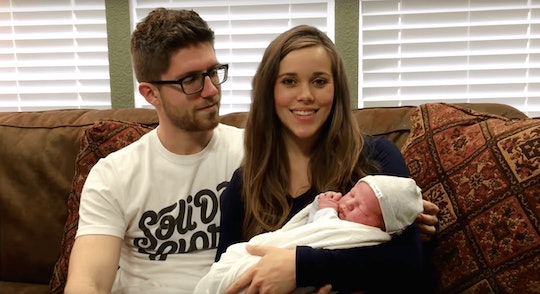 Jessa Duggar Seewald and husband Ben welcomed the latest addition to their growing family on Feb. 6, a boy named Henry Wilberforce Seewald. In their brief video from TLC, it was clear that both Jessa and Ben are over the moon for their newborn. Like many of Jessa's recent videos and blog posts, she's kept things very in the moment and focused on her family as she navigates the world of parenthood. Jessa Duggar's quotes about family prove that it is important to her, and that her own family has definitely shaped her views about what family mean in general.

Jessa is one of 19 children of Jim and Michelle Duggar and her family's lives were documented in the reality TV series 19 Kids and Counting for TLC. The Duggars are Christians who practice a very devout form of their religion that promotes modesty, chastity, and a deep devotion to their faith. It's clear that Jessa is already well on her way to passing down to her family the values Jim and Michelle taught her as she was growing up. Here is just a sampling of what Jessa Duggar has said about family — and why it's such an important value to her.

"No Family Is Identical"

In an interview with Us Weekly last year, Jessa revealed that she intended to raise her first son Spurgeon a little differently than she was raised by her own mom: "Spurgeon is still pretty young, but I’m sure that as he continues to grow, I will find that I tend to do some things differently than my mom did." She continued:

That’s the beauty of the individual family. No one is identical. There will be variations with little things here and there, but I know that our foundational goals remain the same — to raise our kids to love God and be a blessing to others

On Being A New Mom

Jessa grew up in a huge family where the older children we expected to help out with the younger kids, but even so, the whole situation changes when you're suddenly taking care of your own child. "You never realize the responsibility of being a parent until you have a baby yourself," Jessa told People Magazine five months after her son Spurgeon was born.

"Opening Our Hearts And Home"

Both Jessa and Ben have said they plan to adopt, in addition to having biological children of their own. They decided that they wanted to adopt even before they got married, and Jessa shared her reasons to Us Magazine:

We have many friends who have walked this road, so we have seen firsthand the amazing power of adoption. There are so many kids out there who are longing for the love of a family, and we feel strongly about opening our hearts and our home to welcome them in.

It's no secret Jessa comes from a big family, as does her husband Ben. During their courtship, Jessa admitted to People Magazine that she wanted a big family of her own, and that then-boyfriend Ben shared those same views: "We both want to have a big family. We are talking about our goals and the future with family." After her son Spurgeon was born, Ben joked about having 15 sons with Jessa, to which she replied: "I think it would be awesome. I'd love to have 15 sons." Looks like Spurgeon and Henry are just the first two in what could be a long line of kids for Jessa and Ben.