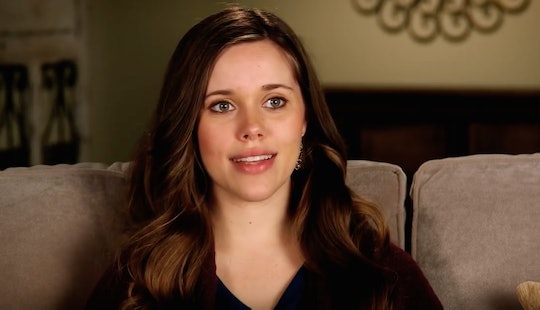 At any given time, it seems like one or more of the Duggar women are expecting. Their adoring fans are on constant baby watch, which leads to a lot of excitement, but also to a lot of unconfirmed pregnancy rumors when it comes to the Duggars. Most recently, Jessa Duggar responded to pregnancy rumors about herself and her comments bring up an important issue: assuming that a woman is pregnant because of the shape of her tummy.

After fan speculation, Duggar recently posted to her Instagram Story to explain her situation, according to the Inquisitr. Along with a photo of herself in a loosely-fitting white shirt, she wrote, “Bc I’ve been asked if I’m hiding a bit of a bump… BIG ANNOUNCEMENT! Yes! But it’s currently a shrinking bump rather than a growing one. #postpartum #baggyshirts #thanksforasking.” The photo has since expired from her Story.

Duggar gave birth to her youngest child, Henry, on Feb. 7, 2017 and also has a 2-year-old son named Spurgeon, according to People. Perhaps it is because over a year has passed since there was baby news for Duggar and her husband that fans are scrambling for a new baby announcement, but that is no excuse to suggesting that she looks pregnant. Women's bodies are changed by babies and there is no wrong or right way for them to look after having pregnancy.

Duggar explained in her Story that her "bump" is not from a new baby, but rather from her last child. Baby Center explains that it is completely normal for women to "take months to get rid of the 'pregnancy pouch,'" while some women never lose it entirely. The outlet explains that it takes time:

It took nine months for your abdomen to stretch to accommodate a full-term baby, so it makes sense that it would take at least that long to tighten back up.

While there may be no pregnancy announcement on the near horizon for Duggar and husband Ben Seewald, it does look like they will discuss the possibility of having more children on the coming season of TLC's Counting On, according to People. In the show's sneak peek, the two are shown discussing what it would be like to have another baby before their fourth anniversary, but fans will just have to wait until the episode airs to find out where they land on that one.

Even if she isn't planning a baby of her own, Duggar has been talking pregnancy. She has been advising her sister Jinger on how to proceed through her own pregnancy and Jinger is apparently loving the advice. In a recent TLCMe video, Jessa and Jinger are shown chatting about motherhood and pregnancy. As In Touch Weekly reported, Jessa says in the video that she enjoys their little talks:

It's so much fun talking to Jinger. She's been going through this pregnancy journey and she's been drawing out all of the different things she's experiencing.

Jessa has also advised Jinger not to sweat the changes that pregnancy is putting her body through, but instead to "enjoy those extra calories!" as In Touch Weekly reported. Good advice, indeed. Jinger is reportedly due in July.

Assuming that a woman is expecting simply because she "looks pregnant" is not only rude, it is wrong. Mothers — and women in general — have enough on their minds without worrying that their tummies don't meet society's obsession with thinness and tight abs. Jessa has her hands full with two little ones running around. If, and when, she decides to add to her little family is no one's business but her and her husband's. Until then, fans desperate to see a new addition to the Duggar family can look forward to Jinger's delivery later in the summer. The new season of Counting On airs Tuesday, Aug. 23 at 8:00 ET on TLC.