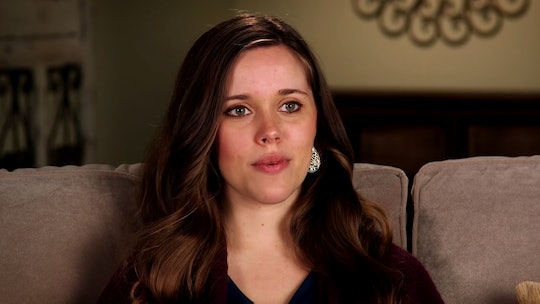 Being a reality TV star must be exhausting, not that I would know from experience or anything. But the thought of inviting cameras into my home and sharing so many personal details about my life sounds like a lot. So I'm not too surprised that Jessa Duggar took a break from social media for a bit, a move which sparked concern among some fans. But the mom's supporters can breathe a sigh of relief because Jessa Duggar returned to Instagram with adorable photos of her three children.

Yes, you read that correctly — Jessa has returned at last! After more than a month away from Instagram, the mom of three posted an update on Monday, Aug. 19. "These three," she captioned a pair of photos, including one of Spurgeon, Henry, and Ivy sitting together on the couch, and another of a wide-eye baby Ivy wearing the same dress and bow, but propped up on a pillow. Judging by the sheer number of heart emojis, fans were over the moon about Jessa's return. One Instagram user wrote, "Yay you’re back!! Missed your posts ... beautiful family."

Another person commented, "So sweet. I missed seeing them and hearing from you."

Yet another follower chimed in with, "So happy to see you posting your beautiful babies!!!"

Others were quick to point out Ivy's resemblance to various members of the Duggar family. "Wow Ivy looks so much like Felicity," one fan declared.

"Oh my word girl version of Spurgeon. ADORABLE!!" yet another follower wrote.

It still isn't clear why Jessa went quiet on Instagram in the first place, though. The Counting On star's last update prior to Monday was on July 10, according to In Touch Weekly, a post which featured a photo of baby Ivy buckled into her car seat with a pacifier. That means Jessa went an entire 40 days without posting a single shot of herself or her family. This is kind of a big deal, considering the reality TV star was the most active family member on social media prior to the break.

A recent update by the Duggar family's account might offer a clue as to what happened, however,, according to Cheat Sheet. On Aug. 17, the official Duggar family Instagram account shared a photo of Jessa's husband, Ben Seewald, riding a carousel with their son, Spurgeon. The caption read, "Love these guys! Ben, you are such a wonderful dad to Spurgeon, Henry, and Ivy!" The update was a little odd, considering Michelle and Jim Bob don't usually put the spotlight on their kids' spouses when it comes to Instagram posts (unless it's a birthday shoutout, that is). Needless to say, fans definitely noticed this apparent oddity.

"What is wrong with Jessa?” one Instagram user asked.

Another person wondered, “Hope everything is ok with Jessa! She hasn’t posted in a while."

The Duggars actually responded to that last one, writing, “She is doing great! Busy taking care of her little ones!” And judging by her update on Monday, it seems that Michelle and Jim Bob passed along the message.

So who knows? Maybe she really has been so busy juggling the needs of her three kiddos — ages, 3, 2, and a newborn born on May 26, according to People — that she (intentionally or not) put Instagram on the back burner. Or maybe Jessa was just sick and tired of the trolls mom-shaming her on Instagram.

Whatever her reasoning might be (she doesn't technically owe anyone an explanation, btw) fans are so glad to see Jessa Duggar back on the 'gram. Hopefully, her next update won't be after another month-plus hiatus. Welcome back, Jess!