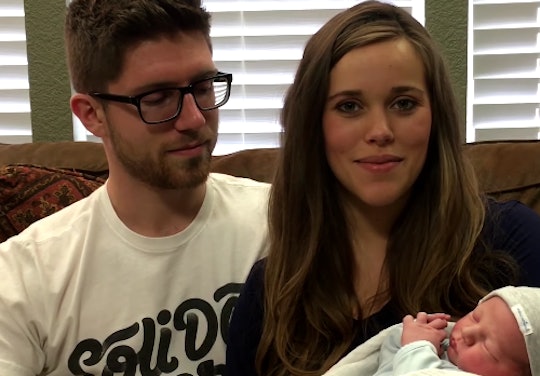 Fans of the Duggar family or of Jessa Duggar Seewald in particular likely know that she has two adorable little boys, Spurgeon Elliot and Henry Wilberforce, with her husband Ben Seewald. And diehard Duggar fans probably know that the Duggars focus more on the "Jesus' birthday" aspect of Christmas rather than the gift-giving and Santa parts of the holiday. But that apparently didn't stop the boys from getting some presents for Christmas, at least if the super cute Christmas photos Jessa posted on Instagram are any indication. Jessa, Ben, and their boys appear to have spent at least part of the Christmas holiday with Jessa's side of the family, and there are some seriously adorable shots of Spurgeon and Henry to show for it.

Jessa and Ben reportedly want more kids in the future, according to People. But, for now, they just have the two boys, one of whom is still not even 1 year old. They probably have their hands full for now, but all the hustle and bustle of parenting two small children is likely helped by the fact that those two kids are seriously cute. The photos Jessa shared showed off how much Spurgeon and Henry have grown already, and how much they seemed to have enjoyed Christmas with the extended Duggar family.

The first photo Jessa shared to Instagram featured Henry with his Grandpa Jim Bob Duggar, and Henry looks pretty pleased in the shot. The last photo in the same gallery post showed Spurgeon and his cousin, Israel, riding mini construction trucks together, wearing what appear to be Christmas-themed pajamas. It's possibly the best photo of the cousins the Duggars have shared yet, if you ask me.

Jessa also shared other shots from around the Duggar household during their Christmas celebration. The photos mostly show the aftermath of various Duggar kids and grandkids opening gifts and eagerly grasping at new toys, with boxes and wrapping paper strewn about. But most importantly — and most families will tell you this is the best part of the holidays — the photos showed the family all together for Christmas at the main Duggar house.

One notable omission from the photos? A Christmas tree. The Duggars reportedly don't do a big Christmas tree, because they focus instead on their belief that the holiday is Jesus Christ's birthday, according to In Touch Weekly. At least, they haven't done a big tree in the past, and if they chose to do it this year, it was nowhere in sight in Jessa's photos.

Speaking of not being included, Josh and Anna Duggar and their kids spent Christmas in Florida with Anna's side of the family. But they were in the Duggar's family Christmas photo, which must have been taken sometime before that trip, so the exclusion on Christmas Day was probably not a slight on the Duggar's part.

Some of Jessa's little sisters were in the photos she posted to Instagram as well, and her brother Joseph and his wife, Kendra, made an appearance too. By this time next year, the couple will have their own baby to show off around Christmastime — they are reportedly expecting their first child together, according to People.

And speaking of new babies, it didn't appear that Joy-Anna Duggar Forsyth was in any of the photos Jessa posted either. She is also expecting her first baby, and she and her husband, Austin, decided not to find out the sex of the baby before it was born, according to a family friend and CafeMom. So whether Jim Bob and Michelle Duggar will have a new grandson or granddaughter from that couple next Christmas is still a mystery.

No matter what other grandbabies join the Duggar family in the future, it's a safe bet that Jessa will at least keep sharing photos of her own boys on social media for fans to enjoy. She shares pictures of them pretty regularly, and seems to really revel is being a social media savvy mom. Who knows what sort of cute shots New Years or future birthdays will bring?