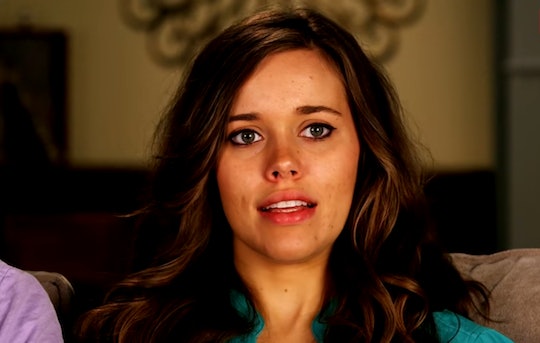 The Bible is a very old book that's been translated and re-translated so many times, is easy to understand how it can be interpreted in vastly different ways. While some Christians take a more laid-back approach to following scripture, Jessa Duggar Seewald's quotes on religion show that she believes in a very literal interpretation, and there's little wiggle room. Though she's more fond of sharing direct quotes from the Bible, or quoting her favorite preachers — like Charles Spurgeon, her firstborn's namesake — she's been known to speak her own mind from time to time.

And it might be best if she lays off quoting others' words, to be honest. That got her into hot water before, when she responded to the Orlando night club massacre with the line "This is when we show that Christians mourn with those who mourn. May the Gospel of Jesus Christ be evident as the only power greater than a broken heart." Sounds nice enough, right? Except that she was quoting Southern Baptist Theological Seminary President Albert Mohler, well-known for his anti-gay rhetoric. Whoops? That's the tricky thing about letting other people do the talking for you; better to use your own words and leave no possibility for misunderstanding.

So what does Seewald believe? Take a look at some of her most interesting quotes on religion:

In Honor of Martin Luther King Jr. Day, she posted on her blog: "Racism is an attitude that is diametrically opposed to Christianity. Racism views others with prejudice based on outward appearance. Christianity views others with love and compassion based on the fact that all humans are sinners in need of a Savior."

Also from the blog, she shared a birthday letter to her mom in which she praised all of Michelle Duggar's good qualities, then attributed them to God. "Becoming a Christian doesn’t make you perfect, but at that point, God starts a work in your life of conforming you to be like Jesus. It’s a continual work, and it isn’t finished until we reach heaven."

On A Whole Lot of Topics At Once

Excerpted from a very long Instagram caption, Seewald drew parallels between the Holocaust, evolution, and abortion. The following is edited for brevity: "I walked through the Holocaust Museum again today... very sobering ... Racism, stemming from the evolutionary idea that man came from something less than human; that some people groups are "more evolved" and others "less evolved." A denying that our Creator — GOD — made us human from the beginning, all of ONE BLOOD and ONE RACE, descendants of Adam ... The sanctity of human life varies not in sickness or health, poverty or wealth, elderly or pre-born, little or lots of melanin ... We must be a voice for those who cannot speak up for themselves. Because EVERY LIFE IS PRECIOUS. #ProLife"

On The Kindness Of Strangers

Even a free drink makes Seewald think about Jesus: "Went through the drive through to grab a coffee for Ben this morning, and the man in the car in front of us — complete stranger — surprised us by paying for it! Sorta made me think of Salvation! It's offered freely to all those who by faith believe, but only because it was paid for by someone else! However, in the case of Salvation, it wasn't a small bill to be covered... It cost Jesus everything!"

On Why Matthew 7:1 Doesn't Really Count

In another very long post, this time from Facebook, Seewald explained why Christians actually should be judgmental: "Whenever someone speaks out against something that God calls sin, 'Don't judge!' can be heard coming from a thousand lips. People don't like to have other people disapprove of the way they're choosing to live their life ... To keep silent is to not care for their eternal destiny! I care about you, and this is why I am speaking out! ... God's judgement isn't something to be taken lightly! It should scare you! Man's 'judgement' is a 1000x lighter... usually just a voicing of disapproval. But when unbelieving, sinful men die and stand before God, He justly condemns them to hell."

In honor of Father's Day, Seewald thanked her father for reading to her as a kid: "[Thank you] for the Bible stories growing up that had us on the edge of our seats, and the times when we thought we'd die of suspense because you'd say 'Do you know what happened next? Well, I guess we'll just have to wait till tomorrow night to find out!' And we'd all exclaim 'Daddyyyyy!!! You HAVE to tell us!!!!'"

You've got to hand it to her, Seewald sure does love that book.