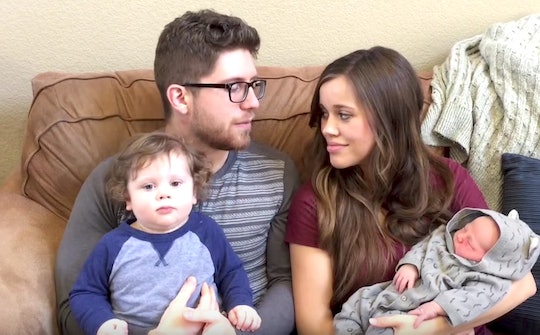 Jessa Duggar Shares A 9-Month Update On Henry, & Parents Will Totally Relate To It

When they're both on screen and off, Jessa Duggar and Ben Seewald are hard at work raising two very young boys — Spurgeon Elliott, who just turned 2 years old this month, and Henry Willberforce, who just turned 9 months old on Tuesday. While her sons are pretty close in age, they could not be any more different in their looks or progress. In a recent Instagram, Jessa Duggar's nine month update of son Henry, really shows how different her sons truly are.

A as any mom knows (especially Jessa, who has 10 brothers of her own) every child is different and Jessa's newest photo, posted to her Instagram account on Tuesday, only highlights this. In the photo, Jessa celebrated her youngest son turning 9 months old by comparing how her two sons looked on their respective 9-month birthdays.

There are some pretty interesting differences. Jessa wrote that Spurgeon, who just recently turned 2 years old, had more teeth and more hair at 9 months, while Henry is a little heavier. But both of the boys have one thing in common: their beautiful smiles. They could not look any cuter or happier in their own photos and it clearly shows.

While the two boys share a lot of similarities (they do share the same genes, after all), Jessa highlighted all of Henry's recent accomplishments and milestones in the photo's caption. Jessa said Henry loves trying new foods (most of the time), pulling on things, and learning how to walk using furniture to help him.

Not only is Henry doing a few things on his own, according to Jessa, he absolutely loves his big brother. "He is always trying to follow Spurgeon around the house, and he's constantly laughing at his big brother's humor," Jessa said about Henry. And the closeness of their relationship is proven in Jessa's photos of the two boys together — they always look so happy to be around one another.

But it wasn't always like that; having two young sons, so close in age has proven to be a little bit of a challenge for Jessa and Ben. Jessa told People in February, shortly after Henry was born, that Spurgeon thought his brother was a toy at first. "He has no concept of being soft," Ben added. Spurgeon also had to get used to sharing his mom with his new brother. "Spurgeon's always been a cuddly boy, but now he has to share mommy's lap with another baby," Jessa said in a video, shared to TLC's account a few months ago. But Jessa also said she believes Spurgeon is "doing pretty well" with his new brother.

Jessa's Instagram photo on Tuesday is not the first time that Jessa has compared her sons when they were at the same age. Just last month, Jessa posted a similar side-by-side photo of the brothers both at 8 months old. Not only do the updates show her youngest son's growth, they also point out the differences in each boy.

But, while it is fun to look at the similarities between the brothers, it is important for fans (and Jessa herself) to not get too carried away with it because research has shown that comparing siblings can be a little detrimental to their self worth. A study, conducted in 2015 by researchers at Brigham Young University found that parents who compared the differences between their children caused those differences to be magnified, influencing their child's attitude towards themselves.

Still, comparing her children sparingly should be just fine. It's fun to see the progress of both boys and how they've grown in their own ways.