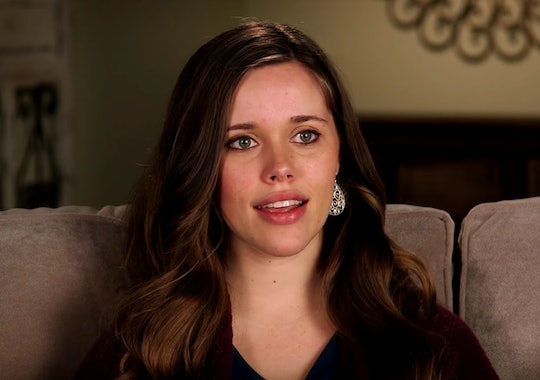 Members of the Duggar family are used to being criticized — especially since they open their lives up on social media and on their family's TLC reality show, Counting On. Duggar daughter, Jessa Duggar is practically an expert on mommy shaming since she is open about her life as a mom to her two young boys on her Instagram account. Because of this, it shouldn't come as a surprise that Jessa Duggar shut down someone trying to mom-shame her on Instagram with the best response. Seriously, the more people shame her, the better she becomes at shutting down the haters.

Duggar is the mom to two young boys — 2-year-old Spurgeon and 1-year-old Henry, according to People — with her husband, Ben Seewald. Parenthood is one of those things that are so exciting and something that mothers, like Duggar, want to share with the world. So, when Duggar gave water to her youngest son, Henry, she had to document her son's reaction and share a video of it to Instagram, which is exactly what she did on Wednesday.

The caption on the video is hilarious, comparing her son's experience trying water for the first time to the first time that she ever tried the flavored sparkling water, La Croix. "Pretty much the exact same reaction I had to La Croix the first time I tried it," Duggar captioned the video of her son. In the video, Henry can be seen taking sips of water, apprehensively, unsure of whether or not he actually likes drinking it, but still going back for more. The expression on Henry's face is so adorable, and based on the laughs heard in the background of the video, others seemed to agree.

Because Duggar found Henry's reaction to drinking water to be so funny, she "narrated" his reaction in the caption of her post. Duggar wrote:

"OK, I'll try it, but just give me a tiny bit! Wow...definitely not Fanta. Not too bad though. Let me have another sip." *Refill* "It's really not that good. Why do I keep drinking it??"

Hilarious, right? But because Duggar compared her son drinking water to drinking the soda, Fanta, fans were kind of alarmed that her son had actually tasted Fanta before. "Please tell me you don't give him Fanta," one commenter wrote, followed by the shocked emoji. But Duggar had a perfect response to this. "He prefers coffee and energy drinks," Duggar sarcastically replied to the commenter. "And of course I'm joking. He only drinks breast milk and water."

Fans quickly came to Duggar's defense on the Instagram post, taking to the comments section to ask the key question — who cares? "Some people are ridiculous who cares if she gave him Fanta or not!," one commenter wrote. "Her child her rules!! Can't even joke nowadays."

Others were also impressed with Duggar's response to the fan. "Great comeback and I have to say it's so sad and unfortunate that you and your whole family have to go through comments like the one you replied to on a daily basis," another commenter said. "No one should ever have to be questioned about their lives — period."

That commenter is so right. But Duggar is used to it by now — she has to experience comments like this and mommy shame quite regularly. Duggar has been shamed for having a dirty home, according to Yahoo!, for letting Spurgeon throw a phone in a toilet, according to In Touch Weekly, and for letting Henry play outside barefoot. But these are things that happen when parents have two young sons under the age of three. Sometimes, kids go outside barefoot or accidentally throw their parent's phone in water, and sometimes parents let their home get a little messy. But all of that is perfectly OK.

A cute video of Duggar's son's reaction to drinking water should have not been the place for criticism. But, based on her great response, Duggar is more than equipped to handle the "shame."