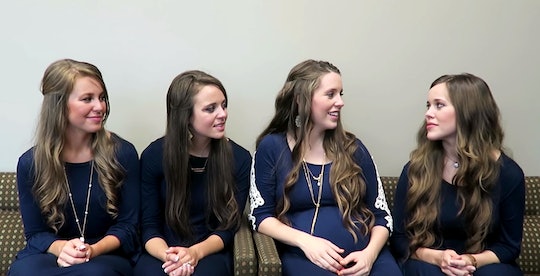 In case you missed the big news, there's one less pregnant Duggar out there. That's because Jessa and Ben have welcomed a baby girl! So far, the proud parents have shared one, super adorable photo of their newest addition. (And their daughter is simply precious.) However, I'm sure Counting On fans are probably dying for more glimpses of those irresistibly kissable newborn cheeks. Well, you're in luck. Because judging by their Instagram photos, Jessa Duggar's baby girl is feeling the love from her doting aunts

But first, allow me to catch you up to speed. Jessa and Ben Seewald announced on Monday that they had welcomed a baby girl — whom they named Ivy Jane — on Sunday, May 26, USA Today reported. "We were getting ready for church when my water broke, and we were thinking ‘Well, I guess we have a change of plans!' After three and a half hours of labor, Ivy was born at 5:57pm," the Seewalds wrote on their website." Ben and Jessa noted that Ivy's due date was actually June 5 — so she ended up arriving more than a week early. Which was surprising, considering Spurgeon and Henry both came late.

"Ivy was born at home weighing 7lbs 14oz and 20 1/2 inches long. She feels so tiny compared to her siblings!" they wrote. "Spurgeon was born at nearly 10lbs, and Henry close to 9lbs. We’re so grateful to God for this precious gift. She is already so loved. Her big brothers adore her!"

Although Jessa hasn't yet shared any other photos of baby Ivy — and who could blame her, she just gave birth and has two little boys to run around, too — several of her sisters have. And it looks like many of the Duggar women have already had a chance to meet Ivy for the first time. Jill Dillard share a photo of herself grinning while holding her brand new niece, writing, "Congrats @jessaseewaldand @ben_seewald on little Ivy Jane! 💕Love her so much and love the name! Such a little doll! 🤗."

Meanwhile, Jana Duggar shared a shot of Ivy wearing a pink bodysuit and grey handband, and with her eyes open. "Welcome to the world little Ivy Jane Seewald!💞," she wrote. "So excited for you Jess and Ben.... your first little girl! 🎀."

Kendra Duggar — who is currently expecting her second child with husband Joseph, according to People — posted two photos of the newborn to her Instagram Story. In one photo, the baby girl was swaddled in a gray blanket while wearing a yellow headband. Kendra wrote, "Congratulations Jess and Ben!!"

A second photo shows a wider shot of Kendra holding Ivy. "She is adorable," the happy aunt wrote.

Lauren Duggar — who is yet another one of the Duggars expecting a baby this year — also shared a photo of a sleeping Ivy on her Instagram Story.

Too sweet, right? There is no lack of baby snuggles happening in the Duggar family right now, that's for sure. Let's just hope Jessa was able to slip away to take a shower — or a much-needed nap — while baby Ivy's aunties were soaking up all the love. Congrats again to Jessa and Ben on their newest addition!