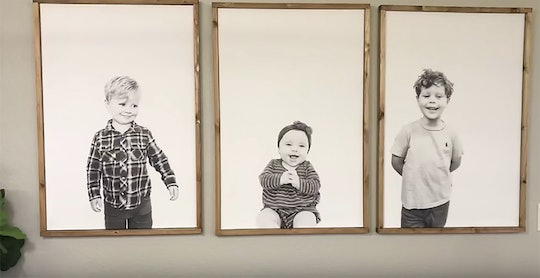 Jessa Duggar recently experimented with the world of DIY in March, sharing her minimalist home makeover tips. The tutorial post has received upwards of 100,000 likes at the time of this writing, and many fans called for Duggar to make additional installments. It looks like the call was heard because on Tuesday, Jessa Duggar shared a DIY video on minimalist kid portraits. The simple and budget-friendly hack has already garnered tons of praise from other creative parents.

As I mentioned, Duggar recently revamped her home to give off a more minimalist vibe with less clutter. She sold her "bulkier" items, removed the living room table, and repainted the walls a lighter color. I didn't hate the space before, but the transformation is a big improvement. "So much more refreshing!" one fan commented on a post about the redo.

Now that Duggar has settled into her minimalist living room, she decided to look up decorating ideas to fit the new style. "I like to have more walls blank and open, so we started brainstorming minimalist ideas for decorating," she said about her efforts in a video shared to her YouTube channel. "My sister Jana actually pulled up a picture of something really cool, creative, and simple. So I said, 'hey, let's go for it.'"

The idea? Life-size canvas portraits of her kids. And although Jessa didn't come up with the idea herself, she seemingly modified it to fit the minimalist vibe she was going for. "With these giant canvasses you can literally freeze time," she explained to fans. "And these will be keepsakes for years to come."

To make the pictures, Jessa posed her kids in front of a white quilt to make editing them easier. "So I used the light room app, imported the raw picture, turned it black and white, and then I used the selective tool to crop around their heads and blowout the background full exposure so you wouldn't see the texture on that blanket," she said in the video, which has received more than 20,000 views as of Wednesday.

After editing the photos, Jessa found a printing company to transfer the pictures to canvasses sized 24X26 inches. Using "Easycanvasprints.com," each canvas cost her $30 each. "That wasn't super cheap, but I chose to not upgrade anything," she said about keeping costs down.

Next step was to frame the canvasses, which Jessa decided to do herself instead of spending the money on pre-made frames. She did so by purchasing pieces of trim from Lowe's, staining the wood to match her fireplace mantle, and finally, screwing the pieces together. She provides more detail in the video, but you get the picture.

The last step was to add a sawtooth hanger to the back of each frame before arranging them on her living room wall. "I just love how each of these captures their personalities so well," she said about the final product.

Fans shared Duggar's enthusiasm, with one YouTube commenter writing, "Love this! 100% thought you had a photographer do those pictures! They look gorgeous."

Someone else said: "I love these. I'm going to have to try to do this. My kids are preteen/teens but I think it would still be so nice to have some great pics of each of them. Thank you for sharing the project."

"Love it!! Such a great DIY. I will definitely keep this in mind since I need a picture to go above our couch," one person commented. "We have a 4 month old baby girl so our daughters (yours and mine) aren't too far apart in age."

I think it's safe to say the interest is there if Duggar ever decides to launch her own DIY series. Until then, parents can enjoy her DIY kids portraits tutorial.