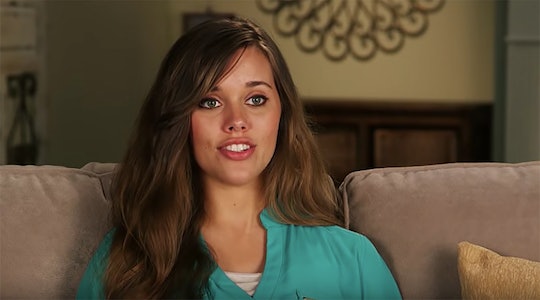 Following a rash of baby news in Duggarland (four pregnancies are in the works, folks) Counting On star Jessa Duggar shared a due date update via Instagram. The best part? Jessa included her two young sons, Spurgeon and Henry, in the sweet message. Buckle up for a truckload for cuteness.

Jessa and her husband of four years, Ben Seewald, announced the impending arrival of their third child in January. "From the day we found out we were expecting, we both guessed boy, and if our predictions are right then we already have a ton the clothing and accessories ready to pass down," the couple wrote in a joint statement via their family website.

The past five months have since flown by, as evidenced by this Tuesday video of Spurgeon and Henry interacting with Jessa's burgeoning bump.

"Watching Spurgeon anticipate the arrival of his new sibling has got to be one of the sweetest parts of this pregnancy," the mom captioned a video of her sons kissing and talking to her belly. "Henry will pat my belly sometimes and say 'Baby!' because he sees us do that, but I don’t think he truly comprehends what’s about to take place."

Jessa ended her message with a due date update, writing: "Little less than a month to go!"

Phew, where did the time go? It feels like Jessa's pregnancy announcement happened only yesterday.

Jessa's due date hint lines up with what she has revealed about baby number three in the past. In the announcement, she shared that Spurgeon and Henry's sibling was set to arrive in "late spring." Spring ends on June 21, so the little one could arrive anytime before this date.

If Jessa makes it past May 21, her next child will be a Gemini, but if she delivers before this date, her baby will be a Taurus, like his dad.

As for her other kids, Spurgeon, 3, is a Scorpio, like his mom, while Henry, 2, is an Aquarius.

Either way, one thing is clear — fans were blown away by the video of Jessa's moving bump.

"That is one active little baby," one person commented. "I think Spurgeon is right, baby isn't kicking, baby is jumping."

Another fan chimed in: "I’m pregnant and baby always responds to big brothers rubs and talks! It’s amazing to see."

"Woah! Look at that baby move!" someone else said. "So cool."

In terms of what all of this movement means for Jessa's baby-to-be, it's a good sign health-wise. "The baby needs to move [in the womb] to be healthy after birth, particularly for their bones and joints," Niamh Nowlan, a bioengineer at Imperial College London, told LiveScience.

If you want to capture your baby in action, wait for the morning or evening when "their movements are easiest to detect," and it's best to check "when you're "sitting or lying down," according to Fatherly.

Anyways, it's nice to imagine Jessa's family enjoying the magic of pregnancy together until their new family member arrives in a "little less than a month." Thanks for the adorable due date update, mama.