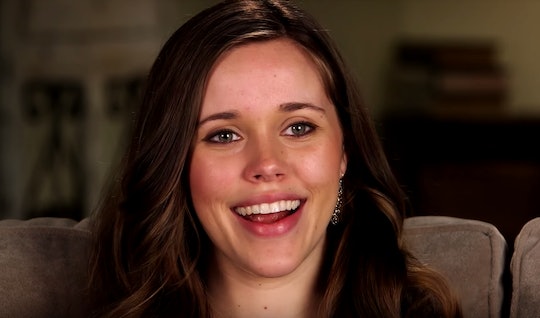 Jessa Duggar's 'Expectations Vs Reality' Potty-Training Post Is So Relatable

Potty training is not for the faint of heart. It can take months — and in some cases years — for that light bulb to finally go off in a little kid's head. ("Oh, I'm supposed to pee and poo in the potty, and only in the potty.") Because matter what method parents end up using, one thing's for certain: There will be accidents. Yep, pee-soaked underwear and pants, puddles on the floor, and stained undies are all a given. But rookies might not realize the extent of the mess going into it. Which is why Jessa Duggar's "expectations vs. reality" potty-training post is so very relatable.

Although Jessa has received flak in the past for her toddler still being in diapers, according to OK! magazine, it seems she's ready to finally take the leap and tackle potty training head-on. (I have a feeling it might have something to do with the fact that she's expecting baby number three with her husband, Ben Seewald, as People reported.) On Saturday, March 23, the Counting On star took to Instagram to share with her followers how toilet training her oldest child, Spurgeon, has been going. Spoiler alert: Not well.

"Getting real here, Mamas. 😄," Jessa captioned a post of two video clips. " Video 1: Expectations. Video 2: Reality." The first clip shows Spurgeon — who turned 3 in November, according to E! Online— standing next to a bed with a new pack of underwear and a box of Nerds candy on it. "Spurgey, tell us what we're doing today," Jessa says to her son. "We're going potty, and we're gonna get some Nerds," he responds. "It's Spurgey's first day of potty training today," Jessa explains. "Do you like your new underwear?" Spurgeon, of course, nods his little head.

It all looks very promising, right? Until you scroll over to the second video and see Spurgeon standing in pee-soaked pants. "Spurgeon, what happened?" Jessa asks in the clip. "My pants leaked again," he says. "It's called you went pee on yourself," Jessa points out. "You were just on the potty 2 minutes ago. We were trying to get you to go. You couldn't go ... Why did this happen?"

"Because I'm all sweaty wet," Spurgeon replies. LOL. This kid.

"So comical, it’s hard not to laugh at his explanations!! 😂😂😂," Jessa wrote. "Started this morning, but so far, we’ve had 3 accidents and nothing in the potty. 🙈 Maybe I’m not having him sit and try long enough?? 🤔." The frustrated mom then asked her Instagram followers for their tips for seated potty training — because she hates "being surprised by a wet toilet seat or a puddle on the floor." (Same, girl. Same.) I may or may not have gotten a notepad out myself to steal ideas for my almost-3-year-old. Because Seewald's Instagram followers definitely delivered.

"The Daniel Tiger potty song was a godsend in our house!" one follower commented.

Another Instagram user wrote, "My stepmom used to put Cheerios in the toilet - a prize if my brother could aim inside the circle 😂."

"So cute that he said his pants leaked!" yet another fan wrote. "Yes, the running water while they are on the potty is what I did ages ago. I let them bring in a book too. I would have them sit for 10-15 mins or so at a time on the potty."

Another Instagram user chimed in with, "We didn't start potty training my first until he was a little over 3. It meant more diapers for us to change buuuut when he was ready it happened in a day. I feel like until they're ready all you're doing is getting frustrated in a situation that you have no control over. 🤷‍♀️ that's just me though. My second is 2.5 and he's still in diapers."

Clearly, Jessa has been initiated into the hell that is potty training. Hopefully — after some trial and error Spurgeon is able to catch on soon. Because as annoying/expensive as two in diapers is, I can't even imagine how stressful having three little ones wearing diapers at the same time would be. May the odds be ever in your favor!