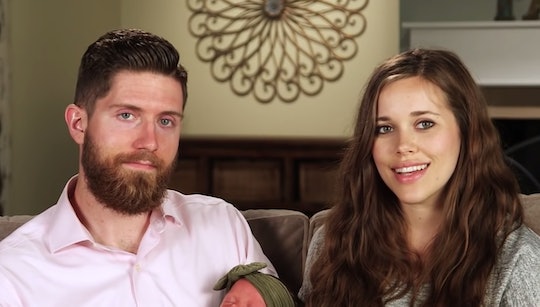 When a man in your life shaves his beard, it can take some time to get used to his new look. But when you're a child? Having your bearded father suddenly transform into a smooth-faced stranger can be, well, disconcerting to say the least. Not to mention kids have a way of telling you exactly what they think of dad's new look. Case in point: when Jessa Duggar's husband shaved his beard off, their kids had some funny reactions to his new look.

Although Ben Seewald was a baby-faced 18-year-old when he and Jessa started courting, he has experimented with varying levels of facial hair throughout the years. Fast-forward to today, and he's 24 and a father-of-three. Ben and Jessa have two sons, Spurgeon, 3, and Henry, 4, and one daughter, Ivy, 3 months. For a while now, Ben has been sporting a full beard — and one that's much longer than he has in the past. Until recently, that is.

As Jessa revealed via Instagram, Ben decided to ditch most of his facial hair because the upkeep was just getting to be too much. I mean, can you blame the guy? "He liked it, I loved it..But who would’ve guessed that the daily upkeep for big beards could be so demanding?" she wrote, rattling off all of the special products and tools he used to keep his beard trimmed and neat, and his face moisturized. "No man wants a routine that requires him to spend more time on his hair than his wife is spending on hers."

Although Jessa's last sentence has sexist leanings (men can have lengthy beauty routines, too!) I understand why Ben was fed up with his beard.

As it turns out, Ben decided to forgo his beard for a handlebar mustache. He looks sophisticated, right? Very dapper.

As for Jessa's thoughts on her husband's new look? "Even though I was sad to see it go, it is nice to see more of his handsome face again," she wrote, explaining that Ben gradually transitioned from a full beard to a mustache (he'll soon shave that off, too). Despite the fact that his facial hair didn't disappear all at once, the Seewald kids had differing reactions, according to Jessa: "Henry likes it. Ivy’s like 'Meh.' Spurgeon said, 'Put your beard back on!'

LOL, Sorry, Spurgeon. That's not quite how hair works.

In case you were wondering, Jessa's Instagram commenters seemed to love the beard update itself. However, their opinions about Ben's mustache ran the gamut.

Jessa's younger sister, Jinger, chimed in with, "I vote to keep the ‘stache! It’s a nice look!"

Yet another person commented, "I have no idea why but Ben actually works the stache. There’s something very boy next door meets Sherlock Holmes."

As much as Jessa loved Ben's beard — and as much as Spurgeon wants his dad to somehow put it back — I'm sure they'll get used to his clean-shaven style pretty quickly, too. (Hopefully, we'll get to see what it looks like after Ben shaves off his mustache!) And hey, there is a silver lining: At least none of the Seewald kids cried in response to their dad's new look.