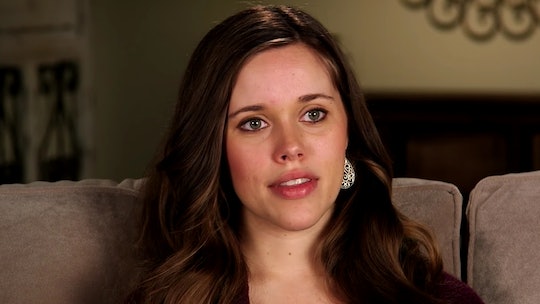 Throughout their reign on TLC, Michelle and Jim Bob Duggar have instilled a solid sense of frugality in their children. The reality TV family can often be found shopping at consignment stores for gently used clothing, filling carts to the brim with groceries at Aldi, and generally living by their, "Buy used, save the difference," mantra. However, that doesn't mean they don't occasionally love shopping on Amazon, just like the rest of us. Well, Jessa Duggar's husband's reaction to her Amazon shopping spree was priceless. And honestly, I've never related to her more.

The mom of three took to Instagram on Nov. 21 to share a scene that recently unfolded on her front porch. It's one that's likely familiar to plenty of moms during this time of the year as holiday shopping season kicks off: A sizable stack of Amazon Prime boxes. And it looks like Jessa's husband, Ben Seewald, was the one who discovered the them Because what really sets off the entire post is the look on his face.

“Just been doing a little Christmas shopping, Babe," Jessa captioned a photo of Ben scratching his head with one hand and holding his front door open with the other, while sporting a highly confused and concerned expression. Check it out for yourself!

LOL. And this is why I'm grateful for the ability to intercept Amazon packages before my husband gets home from work. (Usually, at least.)

In case you were wondering, Jessa's Instagram followers loved everything about the photo. One person commented, "Looks like my front door this afternoon. Lol...."

Another Instagram user wrote, "His face!! Priceless!!" alongside laugh-crying emojis.

Although most followers either shared they could relate, or wrote about online Christmas finds they've snagged so far, there's always that one person who has to go and ruin things. "I’m surprised. I thought you prefer to buy used," the Instagram user commented. Jessa replied with grace, considering the internet stranger's tone. "We do both. @rhealanasofnwa has lots of great kids toys and things that are gently used, so we always check out their stuff first for the kiddos!"

For the record, Jessa often posts about her bargain finds via Instagram — such as these thrift store toys that keep her boys entertained for hours. So in my humble opinion, she's earned the right to go a little wild on Amazon every once in a while.

Jessa also tends to re-purpose the Amazon packaging coming into their home, as well. Back in August, the Counting On star took to Instagram to share the creative way she re-used the brown paper that often comes with Amazon purchases. "In the words of Rocky from Paw Patrol, 'Don’t lose it, reuse it!'" Jessa captioned photos of Spurgeon, Henry, and their artwork. "We used the brown paper that came wadded up in our Amazon box to draw their outlines, and then Daddy sketched in cloaks, swords and shields. Henry got an eagle on his armor, and Spurgeon got a dragon."

Although I don't agree with Duggars on matters of religion, gender roles, LGBTQ+ rights, politics, etc., at least I can say I have one thing in common with Jessa: A love for holiday shopping on Amazon. And both of us have the stacks of Amazon Prime boxes to prove it.