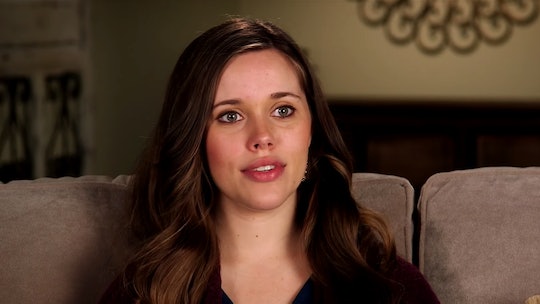 Genetics are fascinating, aren't they? Part of the thrill of welcoming a new baby — at least, for me — is finding out which parent the little one more closely resembles. Granted, many newborns come out with misshapen heads, wrinkly skin, and some sort of facial bruising, so it can be difficult to tell at first. But after a few weeks, you can start to see which side of the family the baby takes after. And Jessa Duggar's new photo of baby Ivy proves she already resembles one of her big brothers.

As E! Online reported, Jessa and Ben Seewald welcomed their third child — and first daughter — Ivy Jane on May 26. "Ivy was born at home weighing 7lbs 14oz and 20 1/2 inches long," the Seewalds wrote on their family's website. "She feels so tiny compared to her siblings! Spurgeon was born at nearly 10lbs, and Henry close to 9lbs." Ivy's smaller size could be due to the fact that she arrived two weeks earlier than her big brothers, according to Today.

Although their newest addition came sooner than expected, the family of five seems to be adjusting well to Ivy's arrival. "We're so grateful to God for this precious gift," Jessa and Ben told E! Online. "She is already so loved. Her big brothers adore her!"

On Wednesday, Jessa took to Instagram to share a new photo of her baby girl, which seems to be her new favorite hobby. And now that Ivy is 5 weeks old, it's obvious she's looking less like a generic newborn and more like a Seewald every day. "Not born as big as her bros, but she’s 5 1/2 weeks now and nearly 12 lbs. This kid likes to eat," the mom of three captioned a series of photos of her daughter. Seriously guys, just look how big she's gotten already. I just want to squish those cheeks!

Not only is Ivy growing at an incredible rate — but fans also think that she's looking more and more like her oldest brother, Spurgeon, who will turn four in November. Jessa's sister, Jill Dillard, commented, "And looking more like spurge now. Lol."

Another Instagram user wrote, "I love chunky babies and she is absolutely adorable!! And she is looking an awful lot like her big bros."

"Looks like Spurgeon has a mini-me," another person declared.

"She looks so much like Spurgeon did when he was a baby!" yet another follower commented.

Someone else wrote, "She is a mini-Jessa!!!" (Which, I mean, Spurgeon does look an awful lot like his mommy, too. So that's a fair assessment.)

If you're curious to know what baby Spurgeon looked like as an infant, here's a glimpse at some of his many (adorable) faces. Yep, I totally see it.

Aside from looking a lot like her older sibling, it's clear baby Ivy Seewald has been feeling the brotherly love. As Us Weekly reported, Jessa shared a photo of Ivy and Spurgeon on June 27 that perfectly captured their sibling bond. “I‘m all teary-eyed seeing my boys love on their little sister,” she wrote. “Spurgeon had 2 people in the house to love on him. Ivy has double that number. As my mom would always say, ‘Love multiplies, it doesn’t divide.’” Too sweet, right?

I can't wait to see how baby Ivy continues to grow and change over the next several months (who knows — by this time next year, she might not look much like Spurgeon at all). But for me, the real question is: Will Ivy end up having her brothers' gorgeous curly hair? I sure hope so!