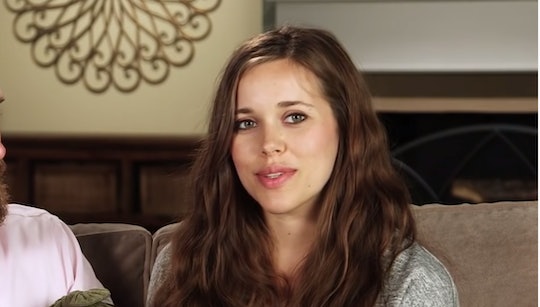 So much has happened in the Duggar family this year. Between a slew of pregnancy announcements, Jinger and Jeremy making the big move to California, the unexpected death of grandma Mary Duggar, and more, Counting On isn't even close to being caught up with what's been going on. Which is why it's a good thing for fans that the adult siblings are on social media. And Jessa Duggar's new photo of baby Ivy shows she's having a blast being a girl mom.

As a refresher Jessa and Ben Seewald have three children. They started off with two sons — Spurgeon, 3, and Henry, 2, before welcoming their third child — and first daughter —Ivy, in May.

On Wednesday, Sept. 4, the mom of three took to Instagram to share a series of photos of her youngest child. "Our little ray of sunshine," Jessa captioned the post, which featured Ivy wearing a yellow and white striped romper with a white headband. (Isn't she just the cutest?) It's clear Jessa is having a blast dressing up her daughter in adorable rompers and matching bows.

Jessa's younger sister, Jinger, declared, "This. Is. Just. Too. Much!!" along with heart and heart-eyed emojis.

Another Instagram user commented, "Oh, she is chunky and sweet!!!"

Still others thought Ivy resembled various members of her family. One person wrote, "Ivy is so beautiful and looks a lot like Spurgeon."

Yet another person wrote, "Oh my goodness she is gorgeous like her mama!!"

Interestingly, the Seewalds were convinced their third child was going to be another boy. (They didn't share the sex of their child until after Jessa delivered.)

“From the day we found out we were expecting, we both guessed boy, and if our predictions are right then we already have a ton the clothing and accessories ready to pass down!" Jessa told People in January when her family made the pregnancy announcement “At the same time, we would absolutely love it if we found out we were having a girl — though we’ve joked that we’d be starting from square one and might have to learn a few things.”

After Ivy was born on May 26, the new mom of three shared what she was looking forward to most about having a daughter. "Bows, pink, ruffles, lace — those are some of the things that are just really exciting about having a girl," Jessa said in a TLC video introducing baby Ivy. "It's going to be totally different."

Unsurprisingly, most of the photos Jessa has shared of Ivy so far have included bows and/or dresses. Like this swoon-worthy shot of her sleeping baby girl the Counting On star posted on June 8.

Or this photo of Ivy wearing a yellow floral dress and a green headband.

And this recent shot of Ivy sporting a striped dress.

Although Jessa recently went quiet on Instagram for over a month, based on her regular updates within the pat couple of weeks, it seems the busy mom of three is back for good. Which means fans can look forward to a steady stream of adorableness via photos of the Seewald kids. And I have a feeling they'll be plenty darling shots to come of Ivy wearing bows and dresses!