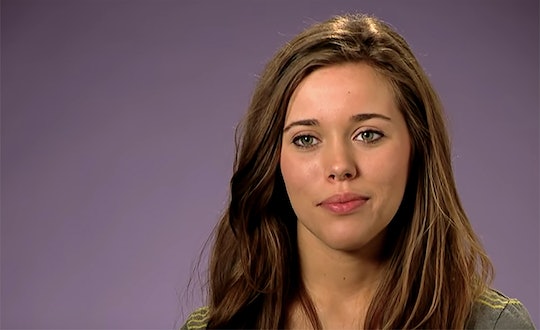 Jessa Duggar’s Post About Anxiety Is Ruffling Some Feathers, & Here’s Why

Throughout the past few years, there has been a lot of discussion surrounding the Duggar family's *many* weddings and pregnancies. Although these life events are undoubtedly exciting, there are plenty of other interesting things worth noting about the large brood, including how they feel about mental health issues. And on Wednesday, fans got a little peek into their views thanks to Jessa Duggar's post about anxiety. As many Counting On diehards have already pointed out, the post is a bit controversial and possibly offensive to those who struggle with mental health problems.

The closest the Duggars have ever come to discussing a personal struggle is when Michelle Duggar revealed that she grappled with bulimia and body image issues as a young teen. “I didn’t tell any of my friends what I was going through,” Michelle said of her battle, according to People. “I was doing it sometimes on a daily basis, or sometimes I would go a week. I felt this was the answer to my problems.”

As much as it was powerful (and admirable) for Michelle to open up about this topic, it was one of the only times she or any of her family members used their platform to draw awareness to a serious issue. Of course, the Duggars don't have an obligation to discuss their personal battles — but it's also reasonable that fans are curious about whether they've dealt with any mental health issues. And given the family's avoidance of this subject, it's no surprise that people are especially interested in Jessa's Instagram post discussing anxiety.

So, does Jessa suffer from anxiety? Although Jessa didn't specify whether she deals with this common issue, it's clear she has some controversial *ideas* about how it should be treated — and many fans are furious.

Here's what happened: On Wednesday, Jessa shared a link to titled, "Nine Arguments Against Anxiety." The video, hosted by a website called Desiring God, outlines specific bible verses that addresses anxiety, like Matthew 6:24-34.

One verse reads, according to Bible Gateway:

Therefore, I tell you, do not worry about your life, what you will eat or drink; or about your body, what you will wear. Is not life more than food, and the body more than clothes? Look at the birds of the air; they do not sow or reap or store away in barns, and yet your heavenly Father feeds them. Are you not much more valuable than they? Can any one of by worrying add a single hour to your life?

Translation: A trust in God will ease your worries.

Another verse supporting this idea reads, according to Bible Hub:

But many people weren't happy with Jessa's supposed implication that a belief in God can help with anxiety. Many fans pointed out that anxiety is a mental health issue that needs to be treated with medication or counseling, while others argued that religion often tries to downplay the seriousness of it.

As a therapist and clinical psychologist and a Christian the Church does a huge disservice to people who have chemical imbalances and need medication by telling them all they need to do is rely totally on what God said: “do not be anxious.” People who suffer with Anxiety hear this from everyone. There are people who will not be whole unless they receive medication and counseling and telling them just to: “do not be anxious” will in fact make them more anxious.

There is a difference between struggling with anxiety (fearing the future, wondering where food or rent is coming from, etc.) and anxiety that stems from mental health issues. I have struggled with the latter since I was a child and have finally gone on medication which has made a HUGE difference. I think that the church does a huge disservice by lumping the two together when there are most definitely distinctive differences.

"Anxiety isn’t a choice Jessa," a fan added. "If it was I wouldn’t continue to live my life with it."

But not everyone agreed with Jessa's critics.

"For crying out loud people. Not everything is going to be written specifically for an individual," one person wrote. "You have to read between the lines, change things up a little, to fit your personal situation. Common sense people, common sense."

"Thanks for sharing. I have chronic anxiety that’s very difficult to manage.. I’m always looking for more help," another fan said to Jessa. "The biggest anxiety is because I’ve been dealing with infertility for 7 years."

For fans of the Duggars, this latest controversy should come as no surprise. For years, people have suspected that the Duggars doubt the legitimacy of mental health issues thanks to their involvement in the ultra-conservative Quiverfull movement. Still, fans will never know how Jessa *really* feels about mental health issues until she actually speaks out about it.

More Like This
Keke Palmer Casually Drops Her Baby's Sex On Jimmy Fallon
Julia Fox’s Apartment Tour Is Peak Mom Realness
Josh Duhamel Is Glad He Took Fergie's Advice About Dating After Divorce
Freeze! The Single From The New 'Bluey' Album Just Dropped
What Parents Are Talking About — Delivered Straight To Your Inbox