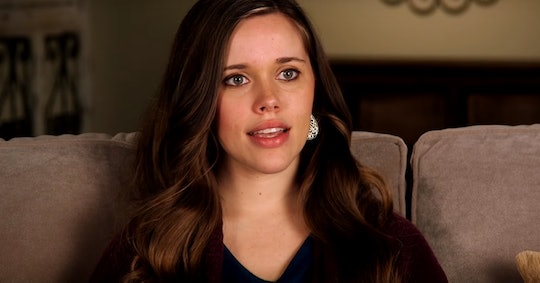 I truly believe that every pregnant person has a clear vision of what childbirth would look like. I know I went into labor expecting that every box in my birthing plan would be checked off. But that was far from the case when I actually delivered my son, who will turn 3 years old in May. I didn't have the vaginal birth I expected, nor did I think I would be so scared. Really, labor is unpredictable, which makes Jessa Duggar's quotes about home birth so relatable.

In a June episode of the TLC spinoff show, Counting On, home video footage from February showed the 24-year-old Duggar daughter giving birth to her second son, Henry, with husband Ben Seewald, according to the Daily Mail. As with Spurgeon, her first son she delivered in November 2015, Jessa Seewald (née Duggar) decided to deliver Henry at home. Seewald wasn't in labor nearly as long this time — five hours, compared to two days for Spurgeon — the Daily Mail reported. But the experience was still stressful and difficult.

Seewald has been open in the past about the difficulties she's faced during childbirth, and managing expectations when things don't go as planned. To be honest, all parents could probably understand her feelings.

Everyone Has A Different Birth Story

Jessa Seewald's older sister, Jill, spent 70 hours in labor before delivering her son Israel David on April 6, 2015. A couple of weeks later, the Seewalds announced they were expecting their first child that November, People reported. Since Dillard's delivery and Seewald's pregnancy announcement were so close together, the younger Duggar sister couldn't help but field questions about her home birthing plans. And Jessa Seewald had a very appropriate response, according to the Daily Mail:

Every birth story is unique.

Seewalk went on to say in a People interview at the time that she's "not comparing" her pregnancy to her sister's, nor is she "worrying about what could happen." Instead, she and her husband Ben "are just getting prepared." And that makes a lot of sense: You can't compare your pregnancy and impending birth to a body that's not yours. You can only get ready for what your body is capable of doing.

Not Everything Goes As You Expect

When I was pregnant for my toddler son, I had this vision that I would have a beautiful vaginal birth with little medication and in a short amount of time. But that was far from the case. After 12 hours, my baby wouldn't descend and I had to have an emergency C-section. In other words, what you imagine doesn't always come to fruition. Sometimes, that's heartbreaking.

Seewald had a difficult time giving birth to her first son, Spurgeon, in November 2015, inTouch Weekly reported. The 48-hour home delivery ended with Seewald in the hospital because of excess bleeding. And the younger Duggar sister found the experience particularly painful because she had to leave her son. She said of her home birth experience, according to inTouch Weekly,

Everything was different than I expected ... I had dreamed about those first moments, getting to breastfeed right away, all that. And so when I had to go to the hospital, it was a shock.

You're Stronger Than You Think

But sometimes, managing expectations also means understanding your own power and what your body is capable of doing. During the home delivery of her first son, Jessa Seewald almost gave up on her birthing plans, according to People. But the people supporting her through labor helped her get back in touch with what she truly wanted for herself and her son. She said, back in 2015, according to People,

I said, ‘That’s it! I’m done! I am going to the hospital and I’m going to get an epidural.' They asked me if I really wanted to do that and I said, ‘No, I don’t, but I do.’ I wanted to try natural if at all possible.

According to the Daily Mail, she had a similar reaction when in labor for Henry in February,

They had to remind me, 'You've got to do this — you're the only one who can do this.' It's usually a good sign that the end is usually near whenever I feel like giving up and walking out.'

No one person will have the same birthing plan. For some people, child birth may mean delivering in a hospital room with an epidural. For others, like Jessa Seewald, it may mean have a home birth with the help of a midwife. But there is one variable that is constant throughout: Labor may not be what you expected it to be. If nothing else, Seewald's quotes about her home birthing experience show she's able to manage that reality well.