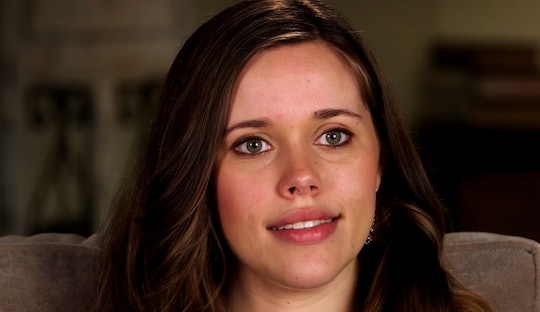 It's clear Jessa Duggar is loving life as a new mom-of-three. Case in point: Ever since she gave birth to daughter Ivy Jane in May, Jessa has shared countless updates about her growing brood. As for her latest reveal? Brace yourself because Jessa Duggar’s son Henry has the cutest nickname for his baby sister.

Jessa, 26, took a prolonged break from social after welcoming Ivy into the world, but she's now back to sharing frequent updates about her growing brood. And Jessa upped the sweetness ante Tuesday when sharing a picture of Henry posing with Ivy in just their diapers. The mom also happened to reveal Henry's sweet nickname for his little sis.

"He loves to hold his 'Bae Ivy,'" she captioned the shot (brother Spurgeon, 3, was probably off doing big kid stuff), a detail that struck a chord with appreciative fans.

"So sweet," said one, while another simply noted, "The Cuteness!" Other users, meanwhile, expressed certainty that Ivy looks like Spurgeon. But some argued the family's only girl clearly takes after Spurgeon more.

No matter Ivy looks like, it's obvious this devoted mama is beyond happy to have her kids enjoying their siblings just like she does. Jessa has spoken out about her sweet childhood memories numerous times, after all.

To recap for those who might not be as familiar with the Duggars, Jessa she was expecting her third child in January. “We are overjoyed that God has blessed us with a baby, due late this Spring!” Jessa and husband Ben Seewald told People back in January. “From the day we found out we were expecting, we both guessed boy...At the same time, we would absolutely love it if we found out we were having a girl — though we’ve joked that we’d be starting from square one and might have to learn a few things.”

Jessa did end up having a girl so one can assume she made some adjustments at home, even though many would argue there's no difference in raising a boy versus a girl. No need to make gender an issue for no reason, right?

No matter where you might land on that issue, it's clear Jessa has a good handle on running her household as a mom-of-three. The Counting On star, for example, previously shared about the importance of modeling teamwork at home via cleanup time.

"Playing together is fun, but even the cleanup can be fun if we do it together," Duggar wrote alongside a video of Spurgeon learning to vacuum, while baby Ivy chilled out on a nearby sofa. "There’s a sense of importance and belonging and being needed. Sometimes as a mom I have to pause and remember this. Yes, it may take 5x longer than if I did it myself, but they find it exciting to help out and lend a hand."

And in another post, Duggar included a video of Spurgeon moving the laundry from the washer over to the dryer (something those of us moms with far older children are still trying to ensure happens on a daily basis). Needless to say, the clip received a bunch of praise from other parents.

I'm happy that this efficient mom also seems to be enjoying these years with small children. Because the kiddos won't always be this adorable or naturally helpful. But one thing's for sure: Between siblings and cousins, the next generation of Duggars will always have each other, cute nicknames and all.