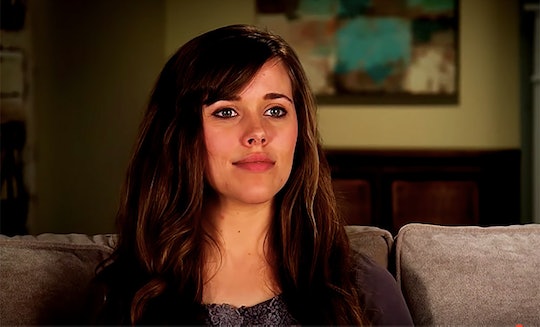 In case you missed the memo, Counting On has officially returned to TLC after some months off. So much has happened in the Duggar family since then, that it has proven difficult for the show (and not to mention, fans) to keep up. To put things into perspective, Jessa and Ben's third child — who was born in May — still hasn't arrived on the show's timeline. Over on social media, however, her daughter Ivy very much exists. One adorable piece of proof? Look no further than this rare sibling snap of Jessa Duggar's sons showering baby Ivy with sweet kisses.

Ahead of an all-new episode of Counting On on Tuesday, Oct. 22, Jessa took to Instagram promote the show with an adorable photo of her three young children. "New episode of Counting On airs tonight! 9/8c on TLC!" Jessa reminded her followers. In the shot, the Seewald siblings are all lying down and sharing the same blanket, with big brothers Spurgeon, 3, and Henry, 2, sweetly kissing baby Ivy, 5 months, on the head. Which is pretty savvy marketing, if you ask me. Draw them in with seriously adorable kids and then tell them to watch your TLC show — well played, Jessa. Well played.

The Counting On star's followers practically melted as a result of the sibling snap. "Best. Brothers. Ever," one Instagram user declared.

Another person wrote, "Oh my goodness! Sweetest picture ever!!!"

Yet another Instagram user commented, "Awww sibling goals... literally they're such cuties."

This pic might be garnering a lot of attention because Jessa has only shared a full sibling photo two other times. But who's counting, right?One of them came last week ahead of the Counting On premiere, with the picture featuring Spurgeon, Ivy, and Henry all sitting barefoot in the grass. Looking seriously adorable, I might add. "New season starts tonight! 9/8c on TLC," Jessa captioned the post. The other post including all three Seewald kids came on Aug. 19 with a shot of Spurgeon, Henry, and Ivy sitting on the couch together with the baby propped on Henry's lap.

Out of the two big brothers, Ivy has most often been photographed with Henry, who seems to be the more affectionate one for now. There was this swoon-worthy photo of Henry pressing his cheek up against his newborn sister's cheek. And on Oct. 1, a shot of a shirtless Henry holding an also shirtless Ivy in his lap was seriously cute. "He loves to hold his 'Bae Ivy,'" Jessa captioned the Instagram post.

Honestly, though? Jessa's followers are probably just thankful she's posting updates at all. That's because the busy mama went silent on Instagram for more than a month this past summer, according to Cheat Sheet. Jessa had been sharing a few Instagram updates per week ever since Ivy was born on May 26, however, from July 11 to Aug. 18, there wasn't a single post shared to her social media account. Hmm.

Confession: Although I don't agree with many of the Duggars' views, I love following Jessa and her family on Instagram because she's just so real. And I hope she continues sharing moments of her three kiddos via Instagram, especially since Jessa's dedicated fans have zero issues with demanding their "fix" of Spurgeon-Henry-Ivy photos. They're just too cute!