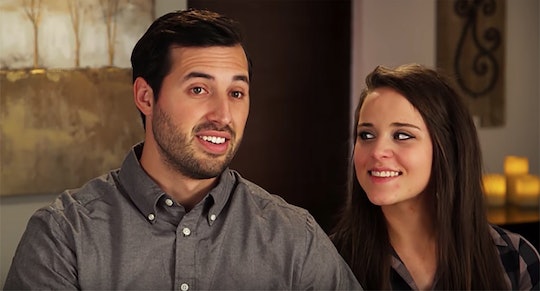 Counting On stars Jeremy and Jinger Vuolo welcomed their adorable daughter, Felicity, on July 19. The couple have settled into parenthood seamlessly, and it's difficult to remember what their lives were like before their baby girl arrived. But while it might seem like Jeremy and Jinger have been parents forever, the truth is the were kid-free for a year following their November 2016 wedding — a long time by Duggar standards. And Jessa Duggar reminded fans of this fact on Saturday when she shared some sweet and funny throwback photos of Jinger and Jeremy Vuolo before they became parents. The cute snaps prove just how much Jeremy and Jinger have grown since welcoming Felicity into their lives, and just how much their time as just an aunt and uncle had prepared them for this chapter in their lives.

Fans of Counting On probably remember Jessa Duggar and her husband, Ben Seewald, visiting Texas to hang out with then newlyweds Jeremy and Jinger. Jessa and Seewald brought their two young sons (2-year-old Spurgeon and 1-year-old Henry) along for the trips, and the couple got the chance to witness parenthood firsthand. Of course, parenting isn't always so glamorous — especially when you're looking in from the outside.

"Henry's personality is just really intense," Seewald said during a funny dinner scene with Jeremy and Jinger in an episode of Counting On, according to CafeMom. "He cries really loud," Jessa added. As for Jeremy's expression during the conversation about Henry's crying? He looked terrified. "Parenting is hard work!" Jeremy later told a producer about witnessing Henry go wild at dinner.

Following the hilarious scene, an off-camera producer asked Jeremy and Jinger, according to People: "Does it make you guys want to have kids or no?" In response, the couple looked at each other blankly before the camera panned away. Ha.

Although Jeremy and Jinger are in a totally different place than they were a few years ago, it's still fun to reminisce about their pre-baby days. Luckily for fans, Jessa has plenty of throwback photos of the couple getting a "foretaste of the parenting experience," with Spurgeon and Henry. Big sis Jessa penned on Instagram:

Seems like this moment from 2 years ago was just yesterday— and now y’all have your own baby! Time flies. ❤️ P.S. Our kids say to tell you they were happy be of service in giving you a foretaste of the parenting experience. 😂 Haha! Y’all are great, and are such wonderful parents. 💞Love you both, @jingervuolo & @jeremy_vuolo!

Too cute. It's heartwarming to remember how hands-on Jeremy and Jinger were with their nephews, and it's funny to recall how hesitant they were about parenting at first. So much has changed in such a short amount of time, right? In fact, Jinger can't even believe how far the two have come. "Awww I know! It’s so hard to believe! 💕 love these pics 😆👌," Jinger commented on the sweet post.

Jinger and Jeremy's parenting transformation aside, the post inspired a cry from fans for Jessa and Seewald to move to Laredo, Texas.

"Ohhh what beautiful words, what beautiful pictures.❤ There are strong bonds of love between you @jingervuolo @jessaseewald @ben_seewald @jeremyvuolo ....," one person said. "Your relationship is special and different. They should move to Laredo."

"@jessaseewald I think you Ben and the boys should move closer to @jingervuolo & @jeremyvuolo i think it would be great for y'all more so the kids and you 2 sisters ... ," another fan chimed in.

Sounds like a good idea to me. Jessa and Jinger are best friends, and it would be great if they could raise their kiddos together. Not to mention, Jeremy is very close to Spurgeon.

"Just a casual Saturday morning hanging with my little buddy...," Jeremy captioned a shot of himself with Spurgeon in March. Aww.