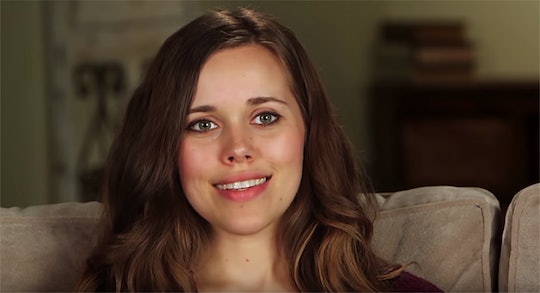 Counting On star Jessa Seewald often shares adorable videos of her two sons, Spurgeon 2, and Henry, 1 to social media. From the recent video of Spurgeon calling his mom a "super hero" to footage of the boys playing with their toys, Jessa has a knack for capturing sweet moments. But just when you thought things couldn't get any cuter, Jessa Duggar's video of Henry's Monday blues hit Instagram. And as it turns out, a lot of people can relate to Henry's hilarious struggle.

Out of all the Duggar siblings, Jessa is probably the most open when it comes to her kids. In fact, Jessa posts photos and videos of her boys about every few days, unlike her younger sister, Joy-Anna Duggar, who prefers to share pics of her infant son once every month or so. Of course, Counting On fans appreciate Jessa's consistent social media presence, especially where it concerns her youngest, Henry. And on Monday, Jessa decided to gift her followers with an *adorable* video of a grumpy Henry experiencing a bad case of the Monday blues.

The video — that has upwards of 274,000 views as of Monday — starts off with Jessa flicking on a light in a bedroom. The video then cuts to Jessa's husband, Ben Seewald, standing over a groaning Henry. As Seewald tries to comfort Henry, who is rocking some major bedhead, the moans get even louder. Yep, I think it's safe to say today isn't Henry's day.

At one point in the vid, Seewald asks his son: "Are you awake, Henry?" a question to which there is hilariously no response. "If this isn’t Monday, I don’t know what is," Duggar joked in the video's caption, according to Instagram.

Shortly after Jessa posted the funny video, people took to the comments section to share anecdotes of their equally sleepy kiddos.

"This is adorable! My son did the same thing this morning," one fan penned, according to Instagram. "He then handed me a pacifier I’m assuming to tell me to plug it and go back to bed ❤️ hahaha."

"Hahaha! Reminds me of my baby boy!" someone else chimed in. "I struggle every single morning with him! I mean, sleep IS the best!"

"My 1-year-old does this when he wakes up and his Daddy comforts him the same way," a commenter added. "Seeing other good Daddies like this melts my heart. You are truly blessed with your three boys, Jessa."

Others chimed in with their own feelings about Mondays because everyone knows adults are no stranger to this struggle.

"Henry I am right there with ya.. Booo to Monday morning..," someone said. tell momma to turn the lights back off. Lol."

"That's me Monday - Friday! Livin for the weekend, sad really!" another person remarked.

If you follow Jessa's Instagram account closely, it's probably no surprise Henry woke up so tired. Jessa recently described Henry as "one of those kids who has no fear,” according to Us Weekly, while adding: “He’s a climber, and he’s fast! We have to watch that kid like a hawk!” Haha, it sounds like Henry needs as much rest as he can get.

Luckily for Henry, he has sweet parents who do everything they can to make the Monday blues as tolerable as possible. Many fans in the comments section applauded Seewald for rubbing Henry's back as he slowly drifted out of sleep, while others praised Jessa for her parenting skills. And for those who are still worried about Henry making it through the day, rest assured he'll find a way to cope — toddlers are pretty resilient creatures, after all.