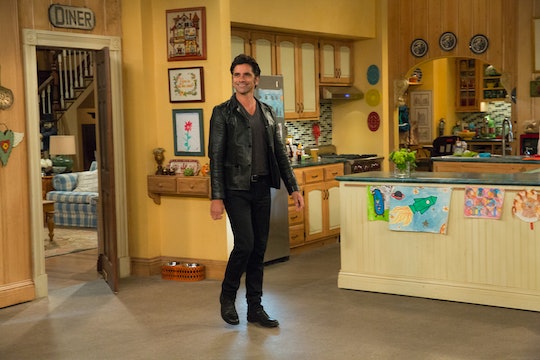 (Warning: This post contains spoilers from Episode 6 Of Fuller House.) "Come, it'll be fun." Those are the words that John Stamos says during the Tanner family Thanksgiving episode which was not only chock-full of special guest stars — including the likes of Danny, Joey, Jesse, Becky, Nicky, and Alex — but also delivered a major wink to Mary-Kate and Ashley Olsen. When D.J. was giving thanks at the start of their delicious looking meal, she mentions how much they all miss Michelle and hope that she'll be able to be there with them next year. That's when Jesse's invite to Michelle on Fuller House came into play. The actor proceeded to look into the camera and say those very telling words: "Come, it'll be fun."

This, of course, isn't the first time the cast has broken the fourth wall to speak directly to the audience. In fact, when Season 1 first debuted, they definitely seemed to do that quite a bit, especially when it came to discussing Michelle's noticeable absence from the show. Remember how they all collectively looked into the camera when her name got brought up for the first time? So yeah, this was nothing new, but now they've taken it even further by outright inviting one (or both) of the Olsens to return to them.

Now the real question is, will this direct callout actually work? Something tells me that it may not. Mary-Kate and Ashley have made it abundantly clear that they have moved on from their life of acting and are strictly focused on their impressive fashion empire. So the fact that they've gone two full seasons without returning to the show that launched their stardom, I'm thinking it may never happen, regardless of how much the cast (and audience, for that matter) want it to happen.

Granted, it's definitely possible and maybe someone like Stamos will be able to charm them into coming back even for a brief cameo. (If anyone could do it, it would be Uncle Jesse himself.) But still, this moment was definitely noteworthy and something that I'm sure immediately caught every fan's attention. Will Michelle take him up on it? Who knows, but it's still fun to see these little (and sometimes very obvious) nods nonetheless.

Other than that, Michelle's name hasn't really been mentioned quite as much as last season, but I think that's a good thing. The series is becoming an entity of its own and doesn't always need to rely on former main stars to make the current main stars shine. That being said, I certainly wouldn't say no to a Michelle cameo eventually. And now after this big reference, maybe Season 3 will see it happen.