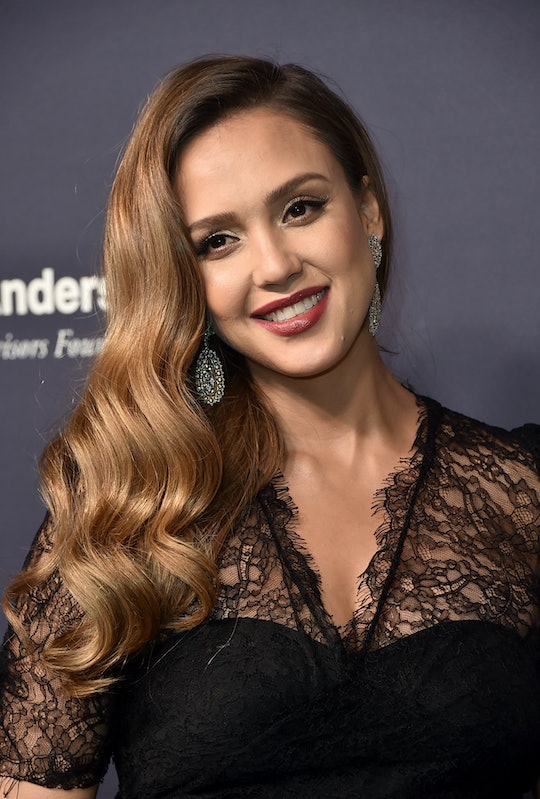 It looks like congratulations are in order for Jessica Alba and her husband, Cash Warren. That's because the actress took to social media Monday afternoon to make a special announcement about how she spent her New Year's Eve — by delivering baby number three! People reported Jessica Alba gave birth to her third child on Dec. 31, and she's got the cuteness to prove it. Alongside a photo of her newborn son, Alba wrote the following message on Instagram: "Hayes Alba Warren 12/31/17. Best gift to ring in the New Year!! Cash and I feel so blessed. Haven and Honor are already obsessed with their new baby bro.#familyof5"

The newest member of the family joins the couple's two daughters, Haven, 6, and Honor, 9, reported People; little Hayes also marks the couple's first son. Alba and Warren had originally met while filming Fantastic Four, Us Weekly reported. The pair became engaged in December 2007, and in May 2008, they tied the knot in a private, courthouse ceremony while Alba was pregnant with their first child, according to the publication. But seriously — what an epic way to end the year. (Just look at that adorable face!) And how cool is it that Alba's youngest child will get to celebrate his birthday each year with fireworks just for him?

Judging by the generous amounts of exclamation points being thrown around, I'd say Alba's followers are over the moon about the arrival of her newest little bundle.

"CONGRATULATIONS!!!!!!! He’s beautiful! So happy for you and your wonderful family," one Instagram follower commented.

"Awwww!!! He’s soooo precious!! What an amazing way to ring in the new year!!! Congrats!!" another person wrote.

"Congratulations on your little prince! I love the name @jessicaalba he’s such a perfect little man," yet another follower chimed in.

The Honest Company co-founder first announced her third pregnancy back in July with a clever boomerang she posted on Instagram, Vogue reported. In the post, the star's two daughters held balloons in the shape of a "1" and a "2," while their mama excitedly held up a number "3" with one hand while resting a hand on her bump with the other hand. Alba captioned this pregnancy reveal with: "@cash_warren and I are officially going to be outnumbered #babyonboard#herewegoagain #blessed."

In October, the actress announced the sex of her baby with a simple tweet, Vogue reported. Alba also took to Instagram to share a photo of the big reveal — blue confetti and balloons showering out of what appears to be a box from The Honest Company, right on top of the big sisters' heads.

Not long after revealing the sex of her third child, Alba dished on why she was happy to expecting a baby boy this time around. “For me … the girls love their dad. I wanted someone to love me more,” she told People in October. “When he comes home, they’re like, ‘Daddy!’ It’s like a party." Alba continued:

For those who might be wondering, Alba and Warren's son was most definitely a planned blessing, E! News reported. "It was always in the cards for them to have a third child," a source told the publication. "It was definitely part of the plan and they just wanted to wait a few years for the right time." As for any more children in the future, that seems like a hard no. "Last one," a pregnant Alba assured E! News in an October interview. But who know what the future holds?

When I was pregnant with my third child (who will be 2 this spring,) I swore up and down that she would be my last. Even in the first few months, I was resigned to the fact that she was last baby that would ever come from my body. But now? Baby fever has returned, and I can totally picture a fourth little one alongside the three children I already have. So heads up, Jessica Alba — you could very well be in my shoes in a couple of years. Congrats on your precious little guy!