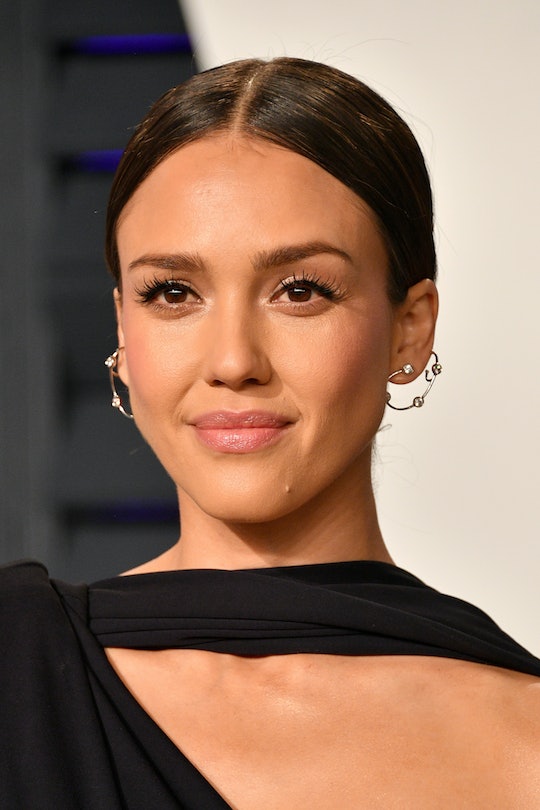 Sometimes, you survive something twice by yourself because there's simply no other option... but by the third go-around, you don't have to. When you have a third baby and there's enough of an age difference with your bigger kids, you have helpers for when things get rough. And having such a squad can also make you temporarily helpless, since you finally have backup to help you out. This is what happened to me, and it seems like it's no different for celebrity moms. And Jessica Alba's reaction to baby Hayes pooping in the tub is so relatable for moms of three.

As Us Weekly reported, Alba, the founder of Honest Company, was doing her usual parenting thing with baby Hayes — who will turn 2 at the end of the year — in the bathtub.

Unfortunately, Hayes took the occasion to, well, do what comes naturally, which resulted in a little extra special delivery in the bath water (and it wasn't soap).

"When my 1 yr old poops in the tub and I ask my 7 & 10 yr old to clean it for me b/c… #imbaby #ihatewetpoo," the actress wrote on Instagram of the incident, the cleanup process for which she documented in full detail on Instagram Stories.

"Half of it ended up in the main tub and the baby tub drain was open and filled w poo. I should have dumped it in the toilet but I didn’t want the chance of it spilling on the floor. #momfail"

Besides the fact that this very same grossness has probably happened to most parents and is so relatable (I think I've just blocked it out), the even funnier part of this anecdote is Alba's brief confusion over how to handle it, with her bigger kids all over knowing exactly what to do.

Honor, 10, and Haven, 7 (according to Us) are pictured in Alba's feed grabbing some gloves and cleaning supplies and helping their not-too-happy mom with some serious disinfecting.

And while the girls, Alba's oldest kids with hubby Cash Warren as detailed by People, don't look overly excited to defuse a messy situation, they are certainly willing to lend mom a hand.

"This is torture," Honor said while cleaning, while Haven plugged her nose and got down to it. Meanwhile, Alba was really having trouble with the situation. "Oh, God. Oh, that is extra terrible. … I can’t get it. What am I gonna do?" she moaned, only half-joking.

Baby Hayes, meanwhile, was just happy to be included, like all third kids, smiling and babbling at the commotion his poo explosion had caused.

Alba's admission that she's juggling a lot and is not always at the top of her game at this stage in her life is a big relief to those of who have multiple kids. After all, just look at her list of hashtags: #imbaby, #honestlynotkillingtheparentinggame, #adultingishard, #sendhelp, and #momfail.

I mean, it's hard to be so many things to so many people. (And doesn't this mama also have a whole entire company to run?) Luckily, despite her momentary desire to leave the mess to her bigger kids (or anyone else, really), Alba rallied in this instance, documenting that she was "saturating everything w alcohol after I’ve cleaned with scolding [sic] water and soap.”

I appreciate Alba and admire her ability to keep going with so many balls in the air (and my respect for her went up even higher when she posted about the fact that she couldn't do it all without an ace nanny, as Working Mother noted). And Jessica, remember, when in doubt, Hayes has two capable sisters to help you out!