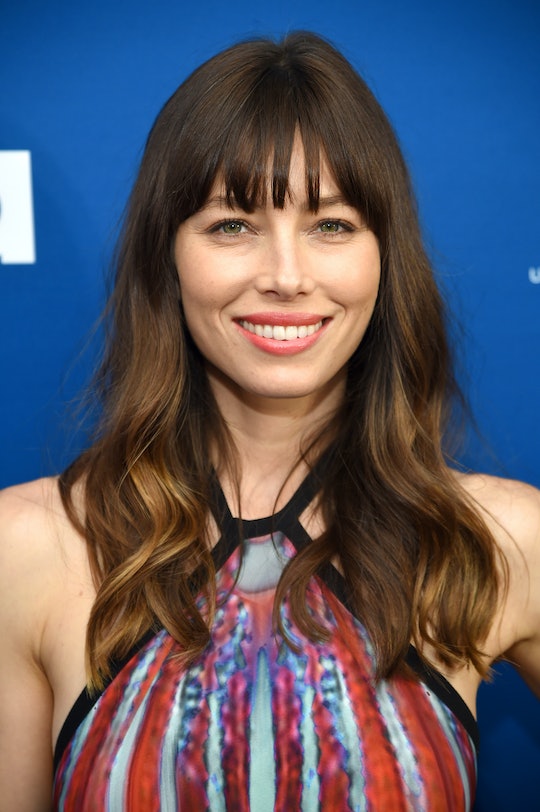 Jessica Biel Describes The Hell That Is The Terrible Twos, & It's *Spot* On

Ah, 2-year-olds. They have a way of melting your heart with their adorable smiles one moment — and then leaving you pulling out your hair in the cereal aisle during a full-on face-on-the-floor, kicking-and-screaming meltdown 5 seconds later. Toddlers of celebrities are certainly no exception, and Jessica Biel is getting real about the terrible twos with her son Silas.

While making an appearance on The Late Show With Stephen Colbert to promote her new show, The Sinner, the actress opened up about what life with a toddler is really like. Biel confessed that "every square inch" of her home is essentially covered in "what she hopes is chocolate," as Stephen Colbert accurately put it, according to E! News. "And if it's not the hopeful chocolate, it's stickers, and Play-Doh, and gak, and crumbs and who knows," Biel said. "Everything is covered with everything."

Biel also touched upon a particularly exhausting game toddlers never seem to grow tired of: finding tiny items and running off with them. (You know, like dust bunnies, a piece of cereal that fell on the floor last week, tiny toys, buttons, etc.) I feel you, mama.

Although having a 2-year-old can obviously be a wild ride, Biel acknowledged Silas has an incredibly sweet side. "I mean, listen: It's not all terrible, by the way," she told Colbert. "He's like the greatest of all time. Now, I'm feeling really bad. He's cute. He's funny."

This isn't the first time Biel has been brutally honest about the challenges of motherhood. Last fall, the actress unabashedly admitted to eating in the shower. (Hey, sometimes a mom's gotta do whatever she needs to to get sh*t done.) I'm sure I'm not alone in relating. I love when celebrities are so over keeping up the facade of having perfect lives. Because as seasoned moms all know, they call it the "terrible twos" for a reason.

My youngest is 18 months old, and I'm painfully aware that her adorable "baby" days are numbered. In fact, I have a sinking feeling she's starting to hit the terrible two stage a bit early. (Noooo!) Some days are so hard — from tantrums, to getting into everything, to refusing the same food she devoured just a few days earlier, I'm emotionally drained. Still, I have a bit of an advantage; since I have two older children, I know the validity of the phrase, "This too shall pass."

I'm also in no hurry for the dreaded threenager stage. So then there's that.